February 01, 2018 by JULIE GARISTO | MUSIC, VISUAL ARTS
Share this article with your network:
A swirl of artistic moods, sights and sounds filled the SubCentral at the Iberian Rooster.

All photos by Daniel Veintimilla.

Auralieus Artist, aka Mark Stevens, and Brook Lyn (whose name is virtually impossible to Google) are longtime collaborators and pals whose work complement each other just about perfectly. The duo’s latest team-up can be seen in the self-deprecatingly titled “Pretty Art by Unattractive People.” Works by both can be seen throughout the lounge in different displays, including clever light boxes on the eastern wall.

What makes this collaborative show even more distinctive is the artist friends work together on individual works as well as showing their own pieces. Brooklyn called Auralieus her “art soulmate” when we met her at the reception.

“I love collaborating with Marko,” Brook Lyn shared after the event. “We approach the work in the same way; it’s pure and authentic in the moment. It’s magic.”

It’s definitely a mutual admiration society. “I really like making the collab pieces with Brook Lyn,” Auralieus echoed. “Its like boom-pow for real.”

Though the dim lighting of the lounge made art viewing challenging, we were able to notice off the bat that both artists reveal honesty and emotion with irreverent, sometimes dark humor and shrewd commentaries on cultural and gender inequities. Brook Lyn occasionally incorporates text and imbues hints of truths that are unseen; think Mr. Subliminal from Saturday Night Live but with evocative prose and illustration. Her unique amalgam recalls comic book aesthetics but with heart-grabbing, resonant imagery.

Meanwhile, Auralieus, known for his lovable robots, offers stark beauty, mischief and dystopian charms, and equally jarring motifs. His work has clean lines and precision that also hearkens illustrated novels but with more of that “boom-pow” mentioned above.

The artists get extra kudos for curating a night of fantastic live music, featuring sets by Jordan Esker and the 100 Percent, Lassyu, Mountain Holler and Dead Cities. Photographer Daniel Veintimilla and I couldn’t stay for the entire night (though we enjoy all four acts). We were able to catch two out of four bands (Esker’s and Lassyu), as you’ll see in the photos below.

“I think Iberian Rooster will be a good place for art shows — especially if they invest in some lighting,” added Auralieus. “The bands were also amazing.” 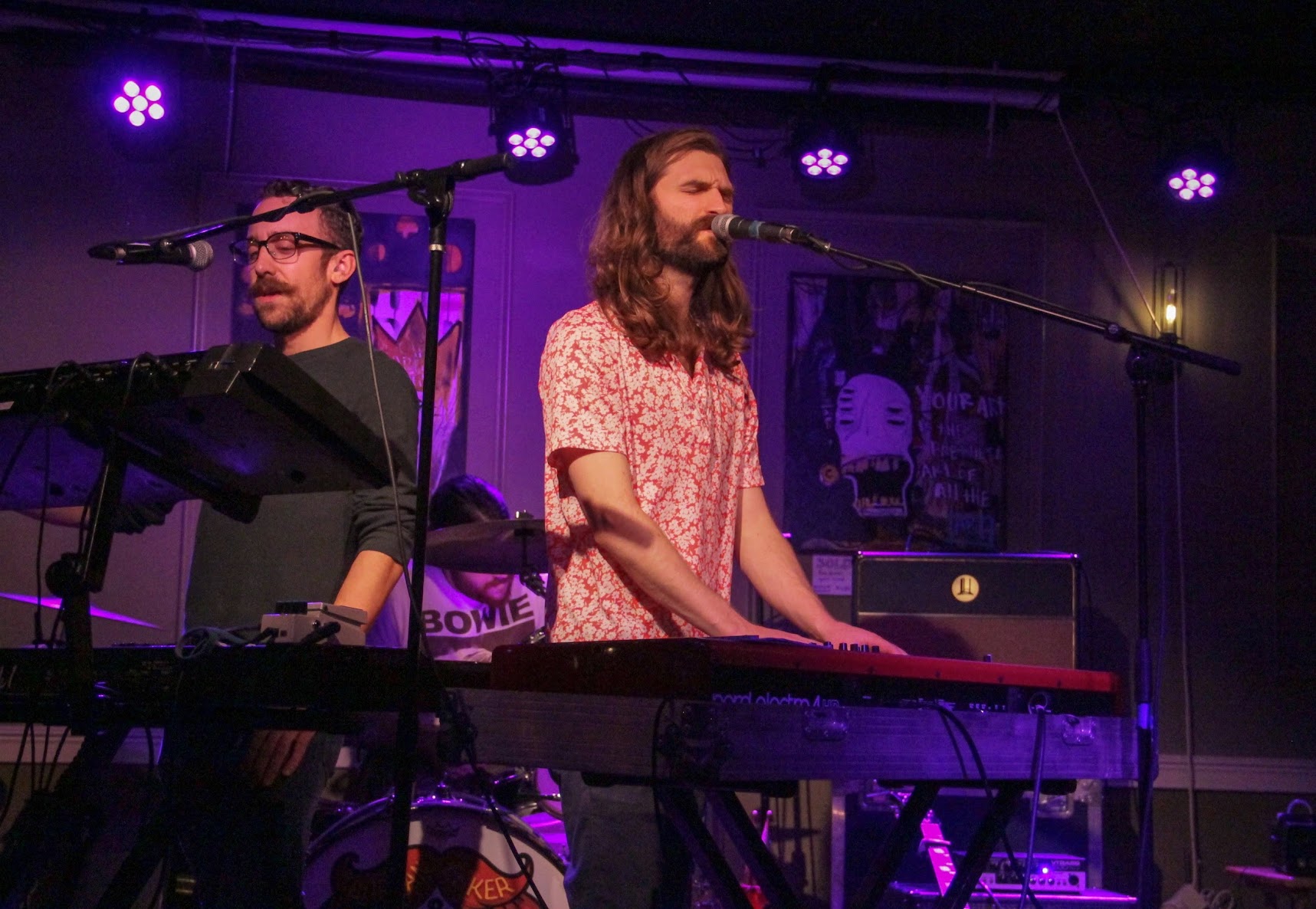 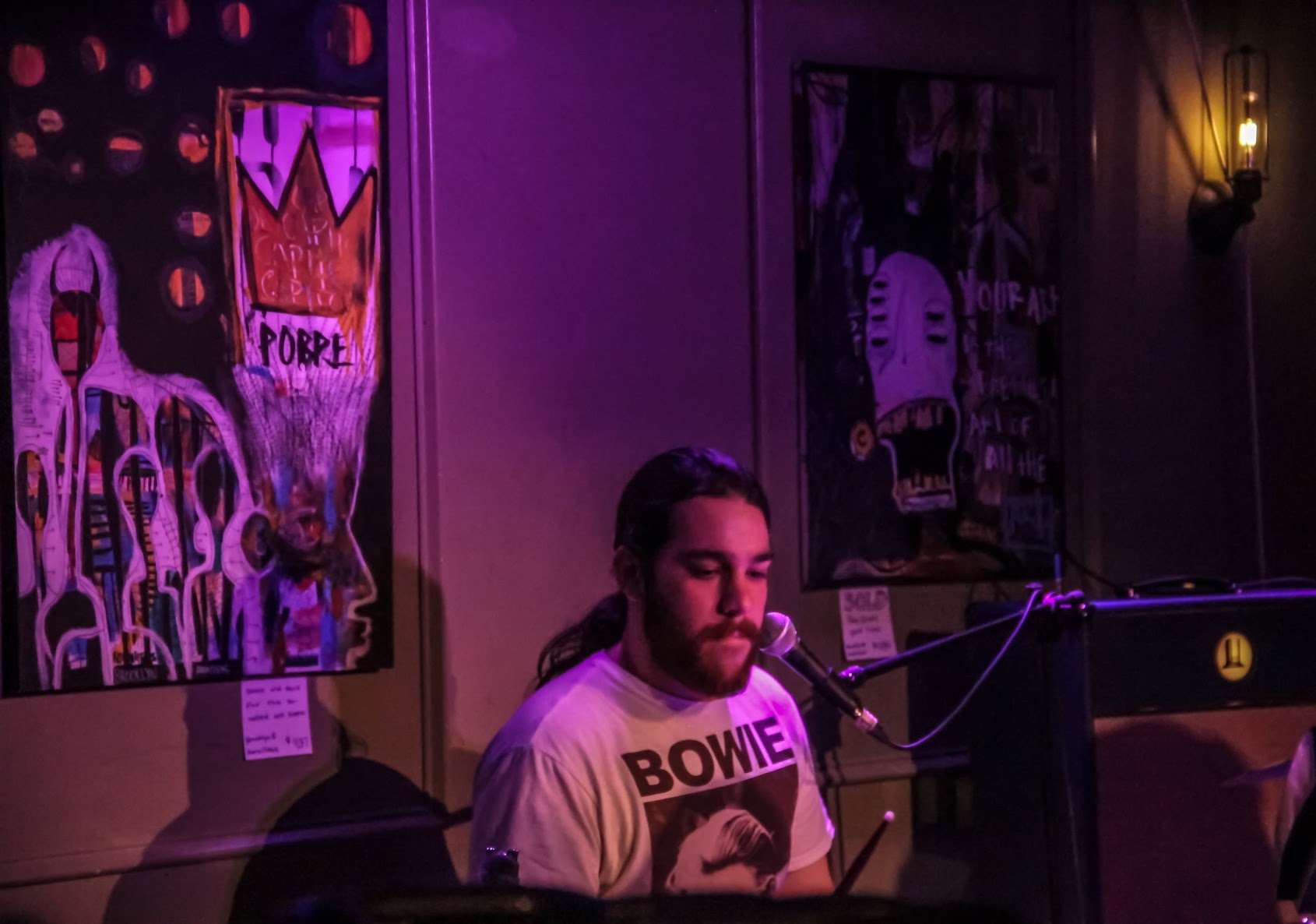 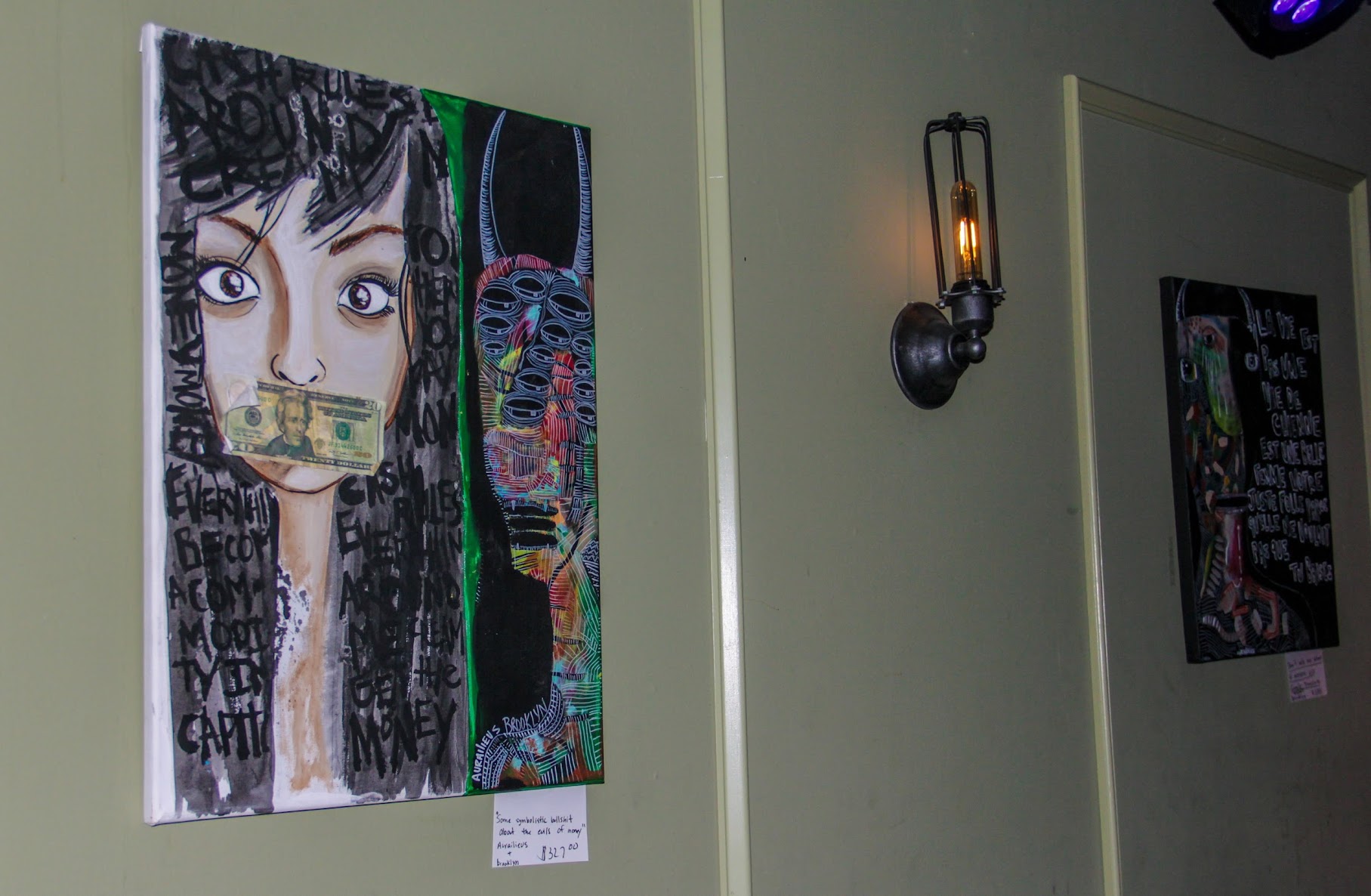 Aurailieus artist worked with Brook Lyn on several pieces in the show, including the irreverent societal-commentary piece “Some Symbolistic Bullsh** on the Evils of Money.” 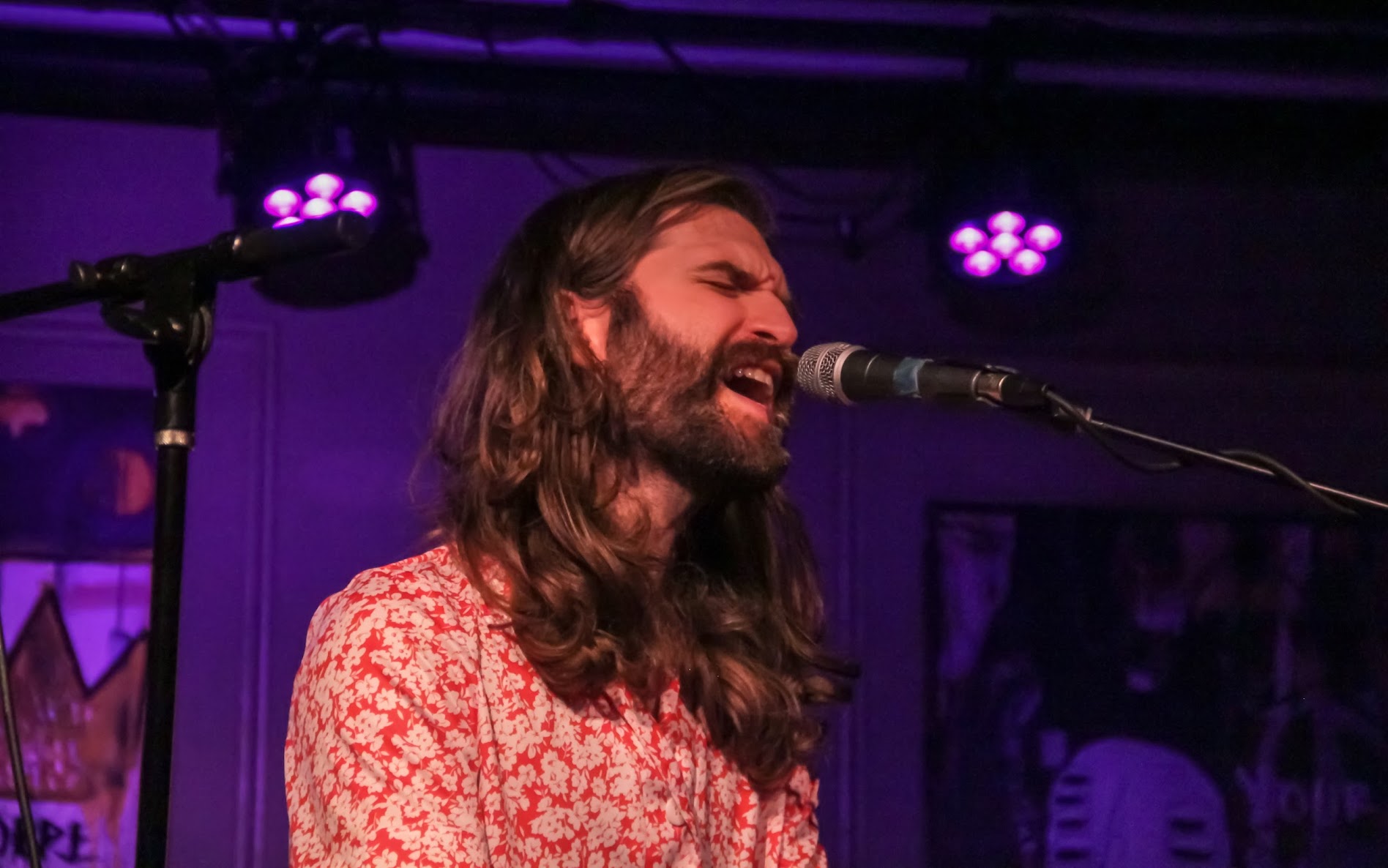 Jordan Esker singing his heart out on tunes that recall a bevy of genres — from ’70s soft rock to progressive to ’80s new wave to folk pop. 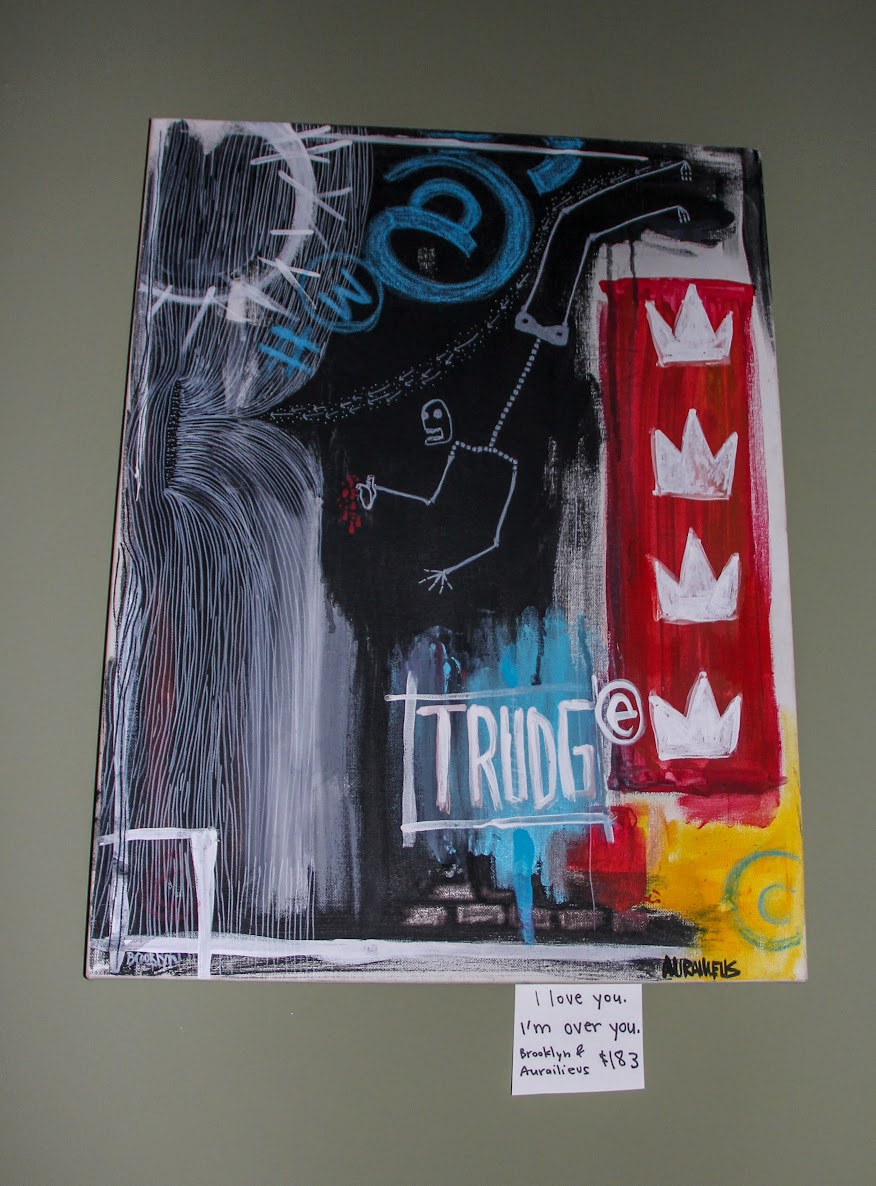 Another Aurailieus collaboration with Brook Lyn, “I Love You. I’m Over You,” captures the confusing and sometimes chaotic nature of relationships. 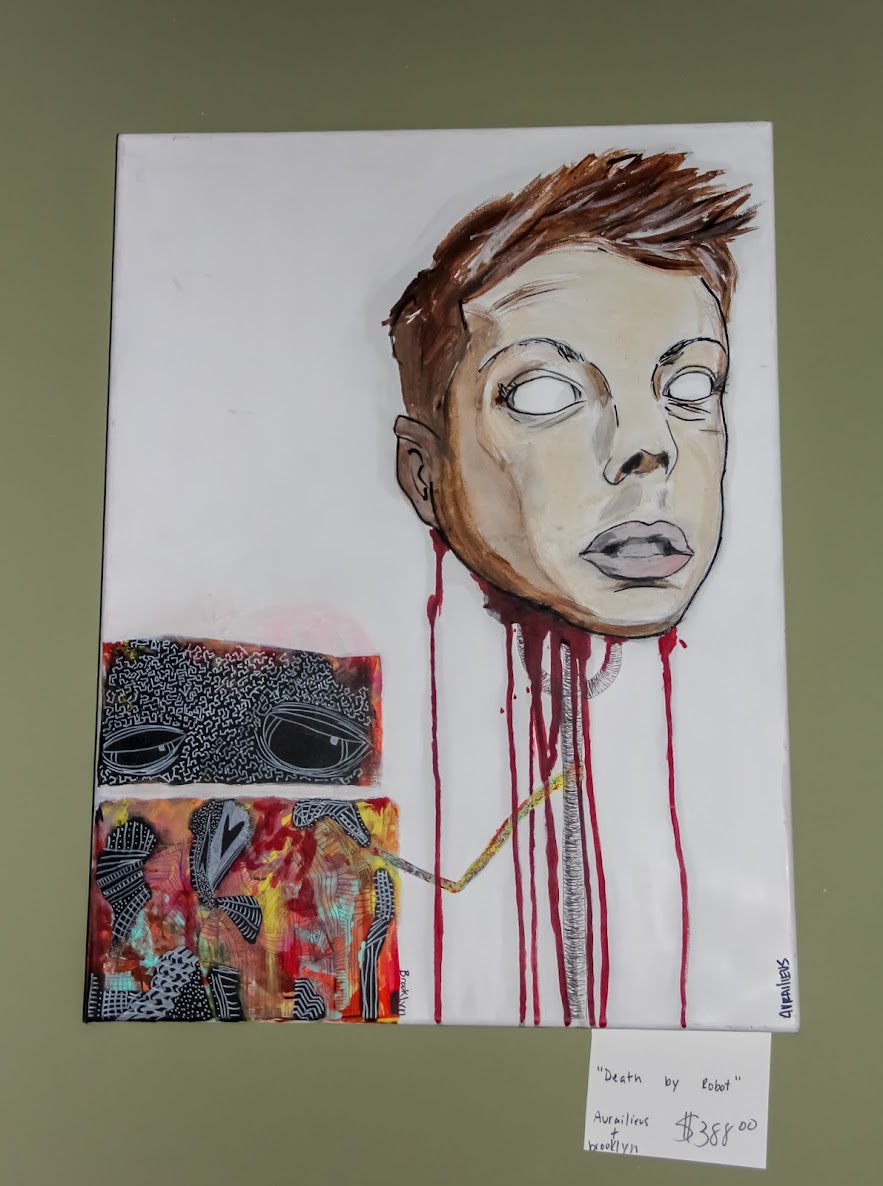 “Death by Robot,” also by both Aurailieus and Brook Lyn, makes us wonder about the paranoia and mixed feelings around artificial intelligence. 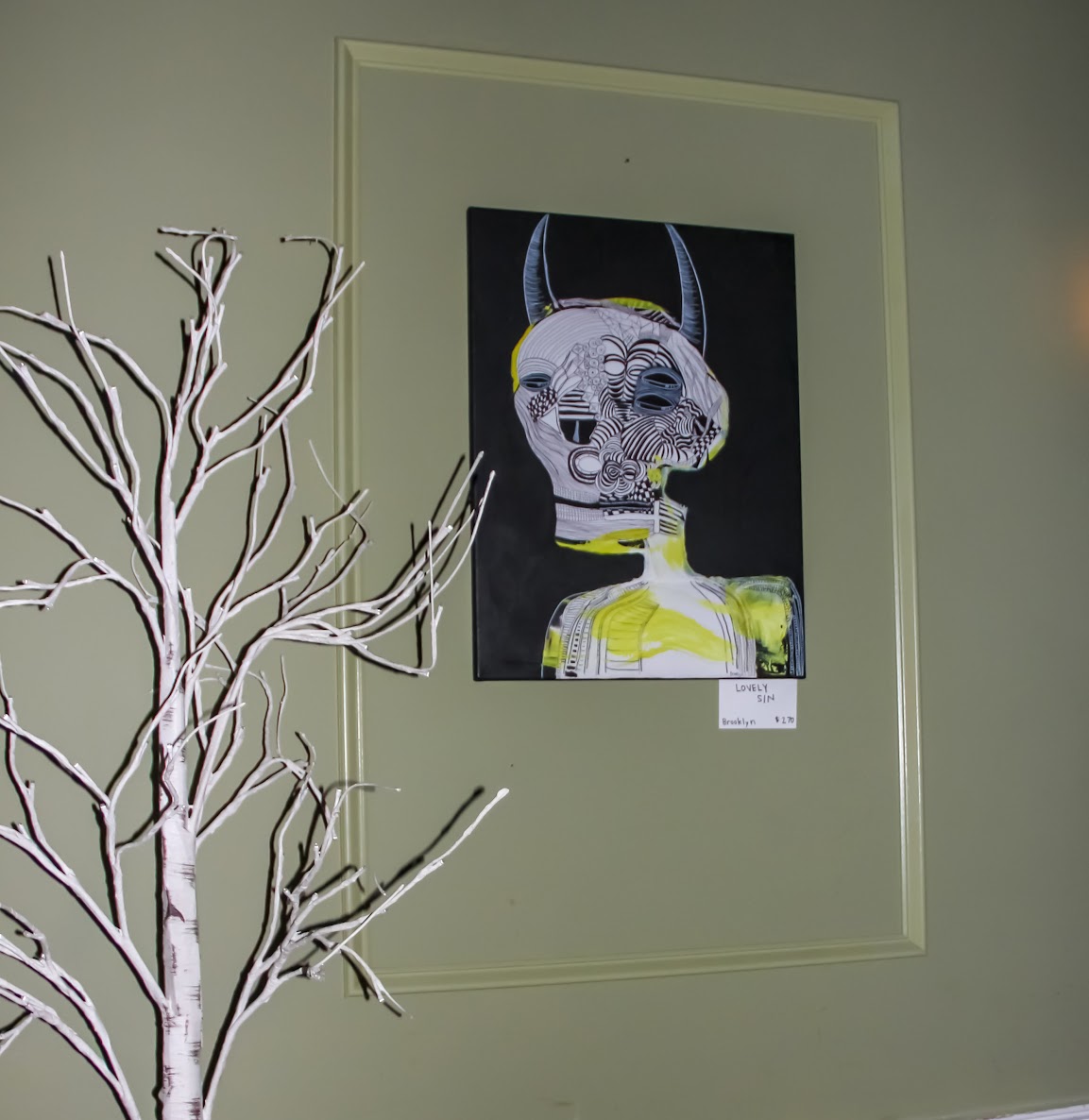 “Lovely Sin” by Brook Lyn presents a combination of methodical illustration and splotches of yellow, offering some intriguing insights into humans’ defective morality. 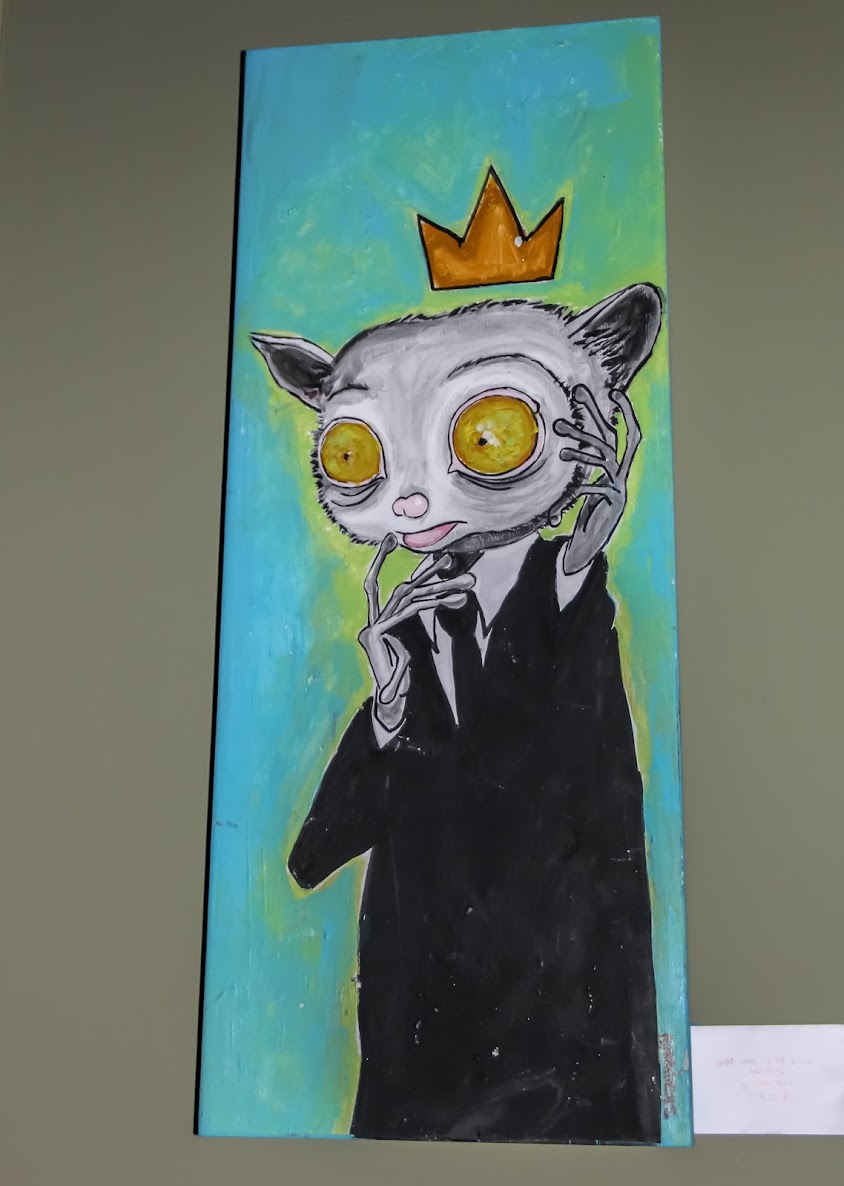 This Aurailieus artist collaboration with Brook Lyn, “What does it all mean anyhow?,” makes us think a little differently about mousy men in expensive suits. 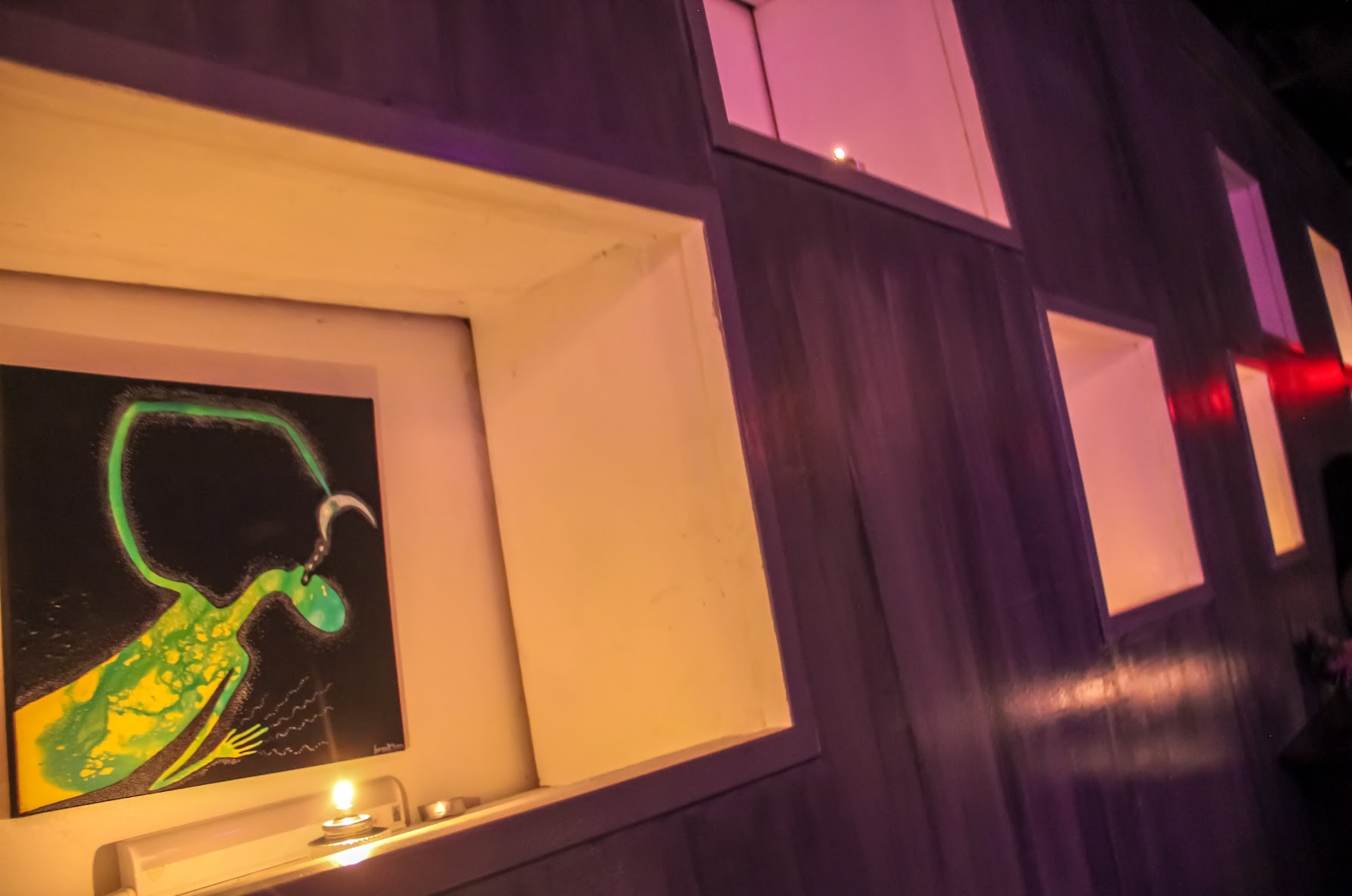 One of the more visually alluring aspects of the event was the artwork in boxes along the east wall. Here we see Brook Lyn’s fluid, alien-like character  in “Moon Blood.” 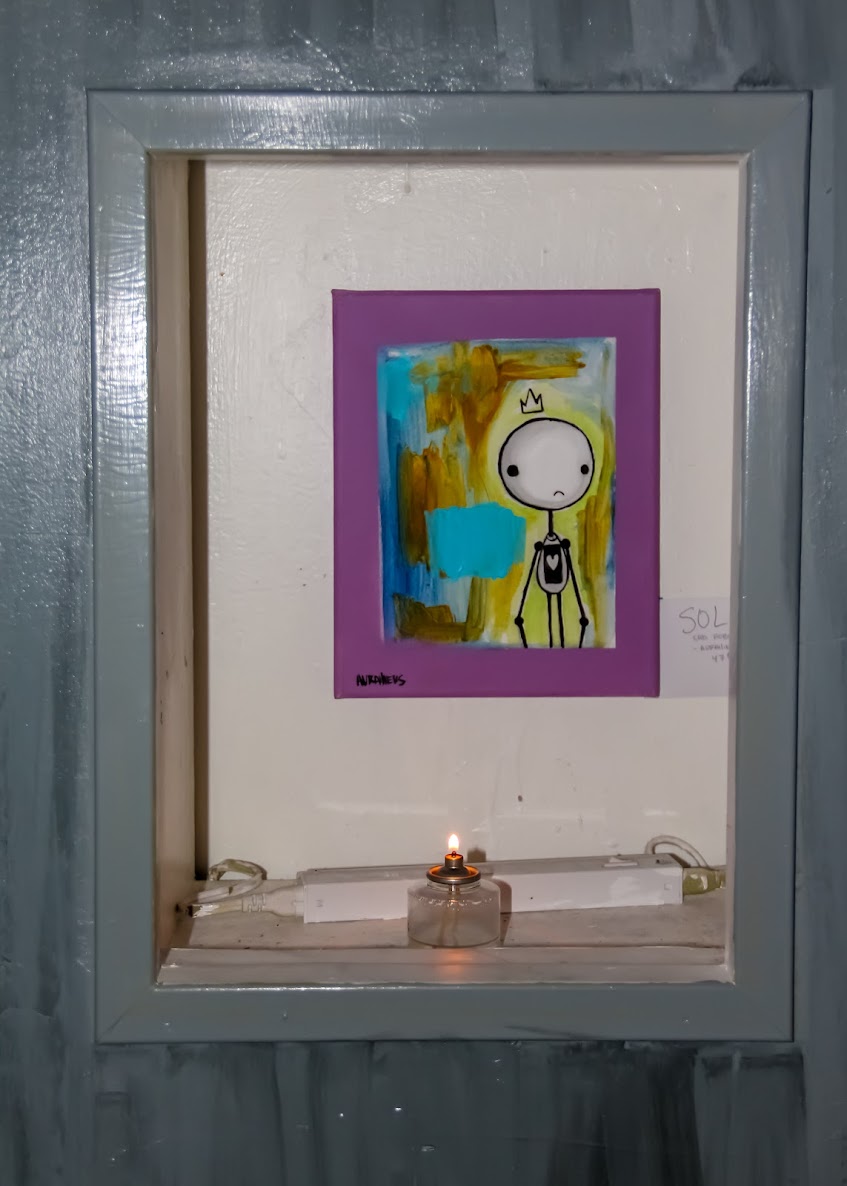 Aurailieus Artist’s “Sad Robot” is both adorable and bewildering. 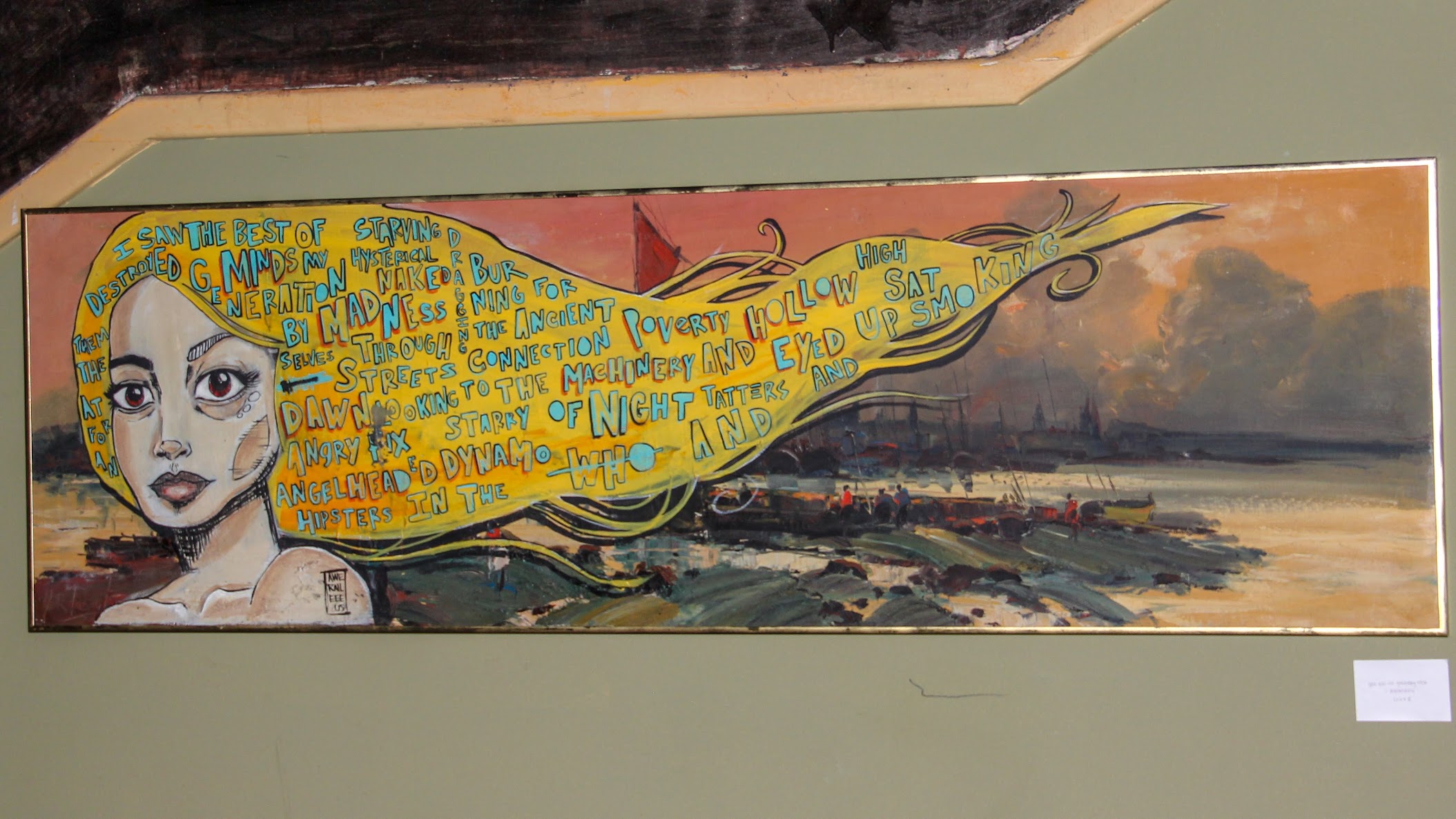 The noise of thoughts, surroundings and the verse of beat poetry come to mind in the Aurailieus-Brook Lyn joint “Girl with the Ginsberg Hair.” 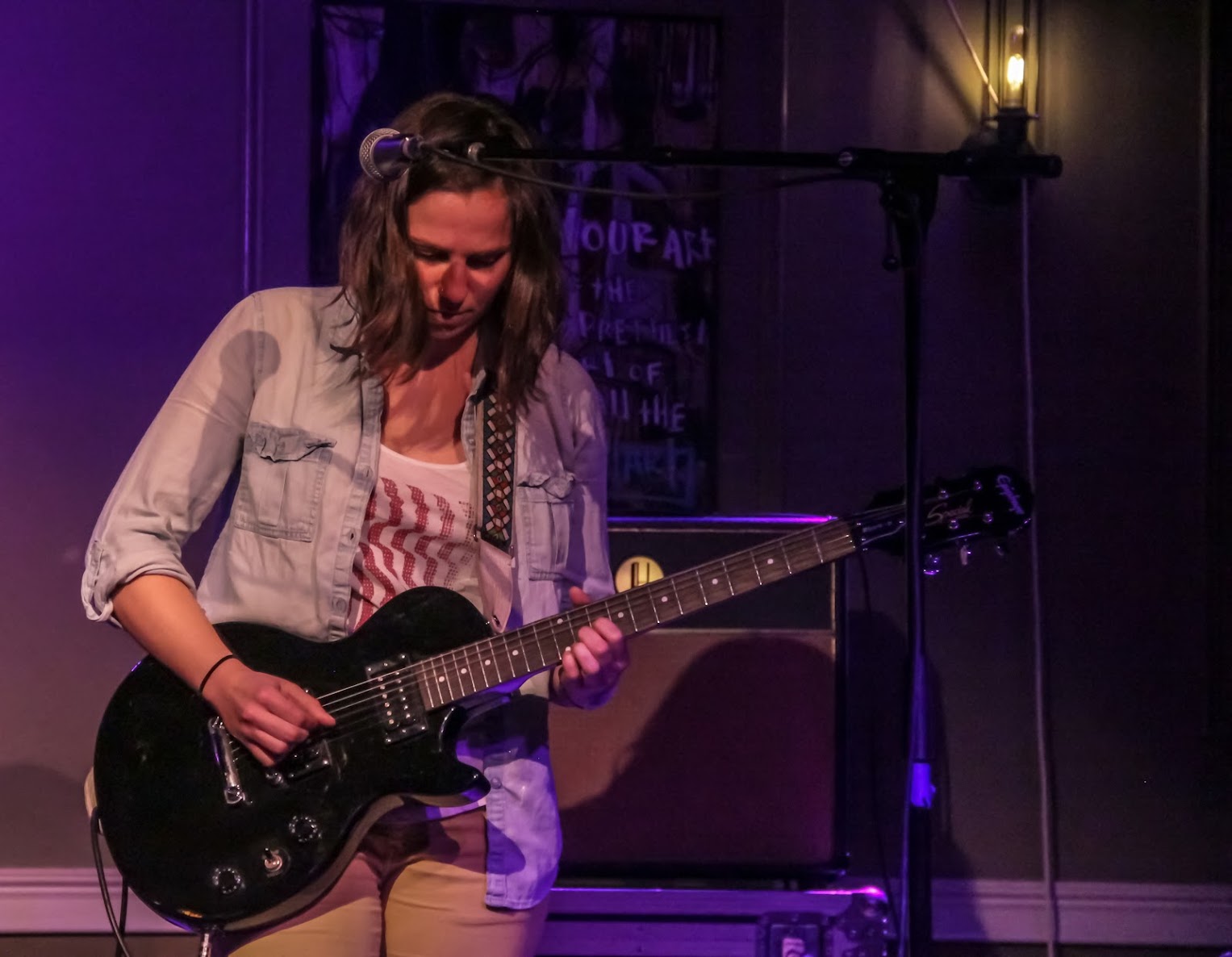 Lassyu‘s Emily Turnage wielded a 12-string and acoustic and belted out an assured vocal, at times delicate and raspy managed to deliver a full-bodied sound with one-third of its band missing. 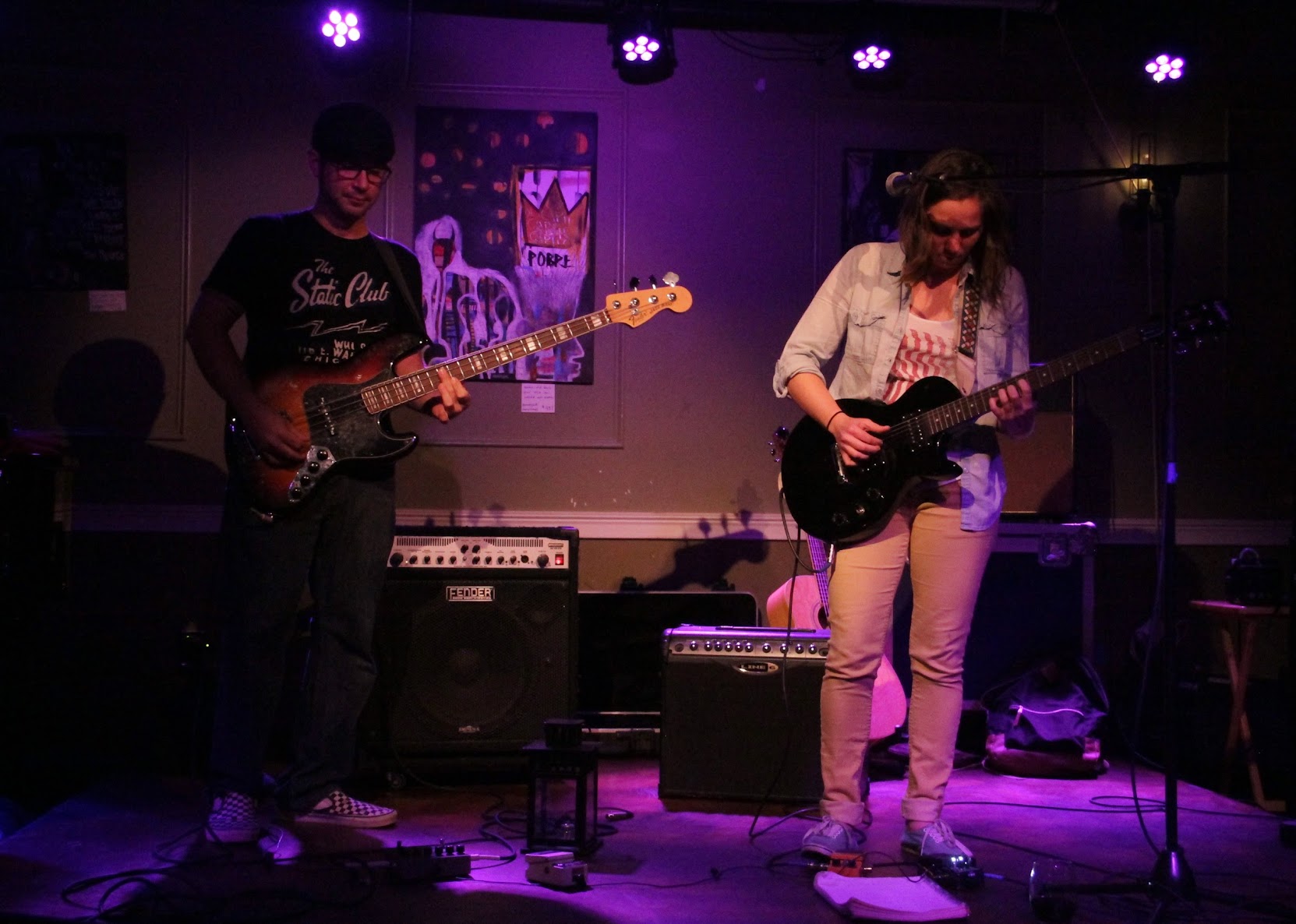 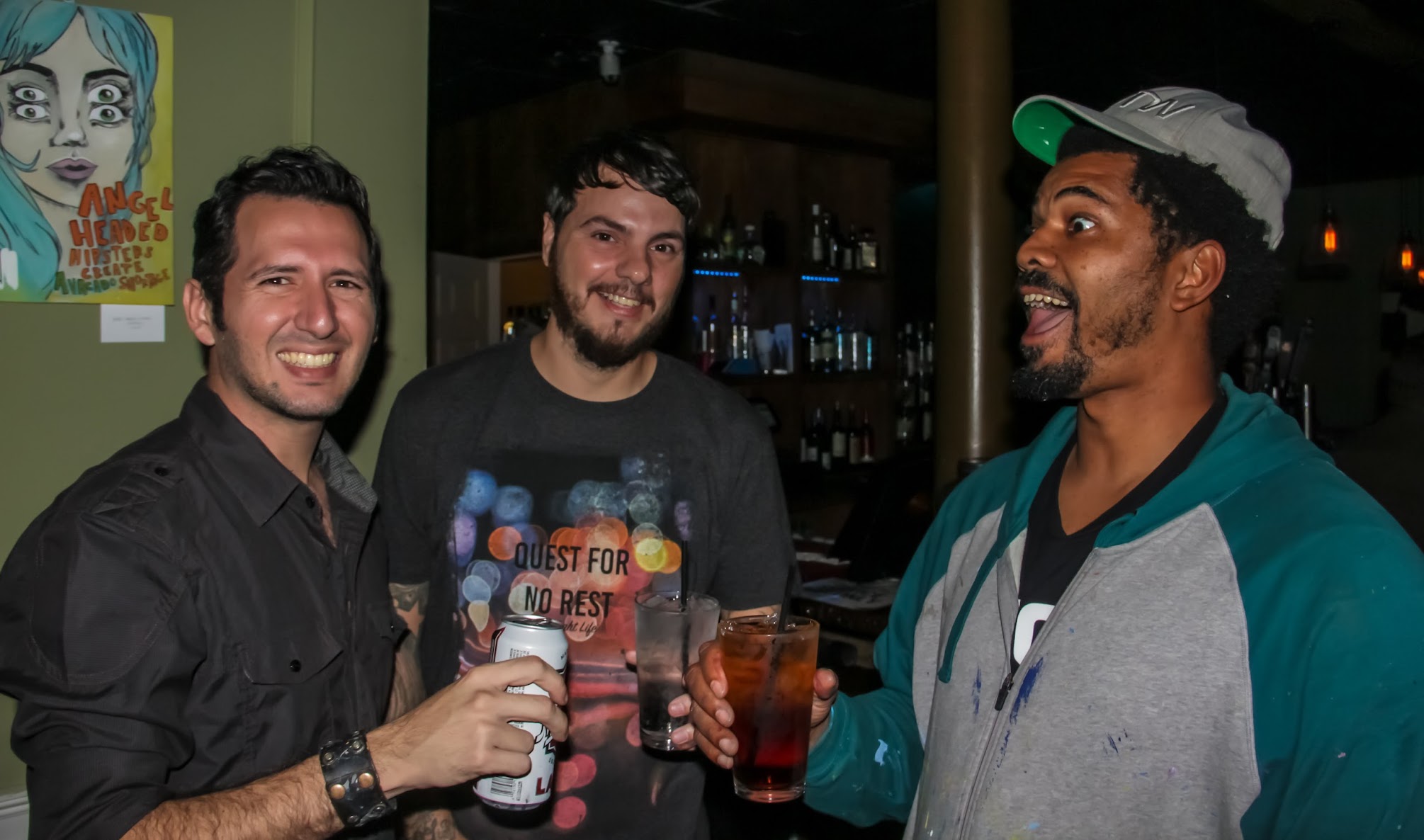 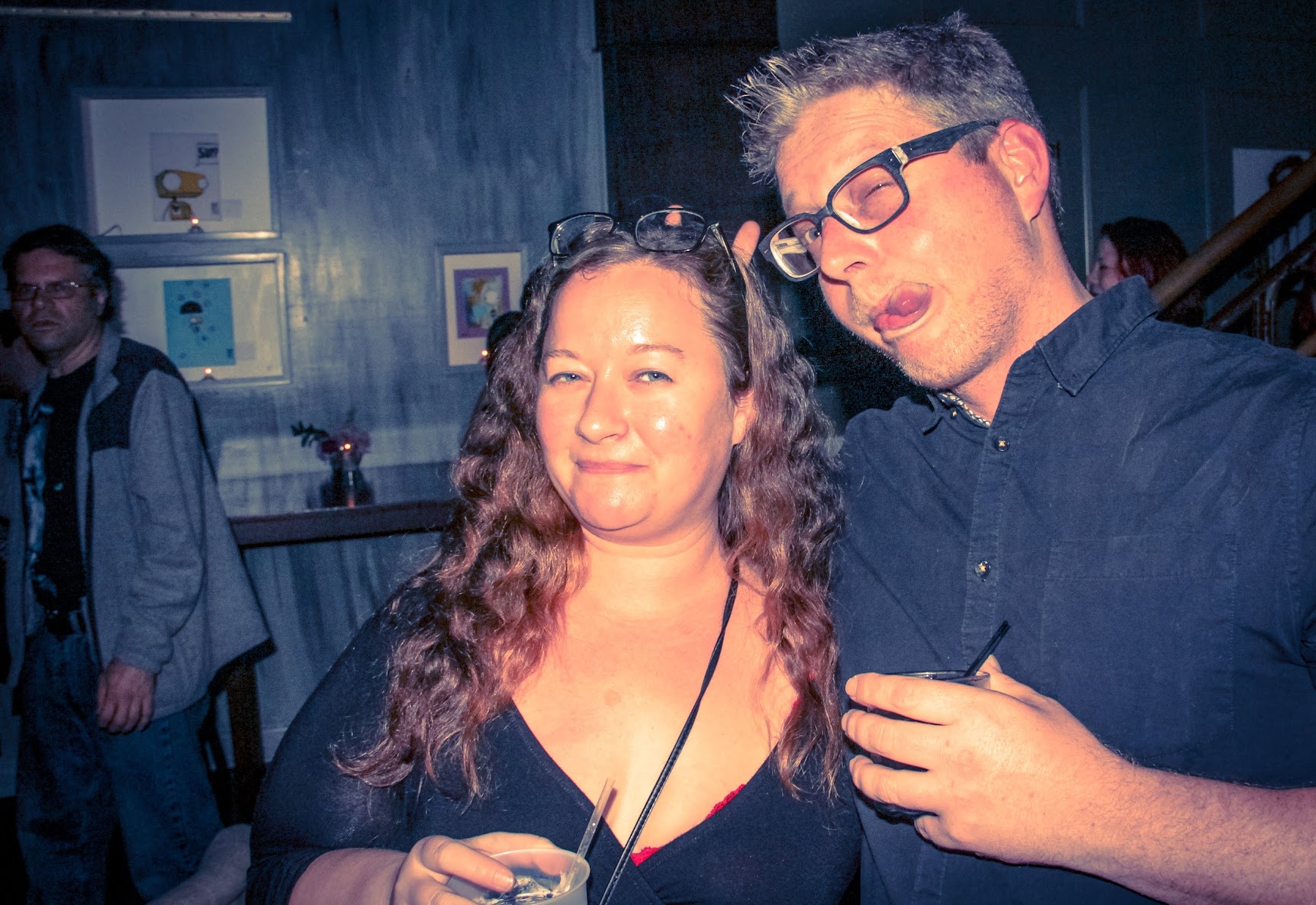 Brook Lyn with Mark Stevens being blinded by Veintimilla’s flash.  In the background Dan Diaz doesn’t appear to realize he’s photobombing the pair.

Et Cultura offered five days of jam-packed art, its sights and sounds too many to (…)