October 09, 2017 by JULIE GARISTO | THINGS TO DO, VISUAL ARTS
Share this article with your network:
Celebrate artistic enterprise and the DIY spirit this Friday in a courtyard surrounded by diverse murals.

As we gear up to celebrate the fantastic murals in downtown St. Pete, let’s pause a moment to remember the DIY spirit that sparked artists to take to the Burg’s city walls in the first place.

Around the beginning of this decade (and some years before that), grassroots artists planted the seeds for the now thriving mural movement, which blossomed on and around the 600 Block and branched out elsewhere at a rapid pace — thanks to contributions of the late, great Woo, Derek Donelly, Chris Parks aka Pale Horse, the Vitale Brothers, Jennifer Kosharek, Sebastian Coolidge, Chad Mize. Zulu Painter, Tes One, BASK, Jim Oleson and his Bloom Art Center and other luminaries.

The artists defied the formality and exclusion of gallery culture, which, for the most part, could be inaccessible to promising upstarts and gifted illustrators who didn’t go the academic route.

Word of mouth spread, and proprietors began to notice the crowd-gathering appeal of Downtown St. Petersburg’s ever-growing outdoor museum. Business owners, in turn, welcomed painters to dress up their buildings to draw customers to their establishments and promote a community spirit. Mural artists increasingly became higher profile, began to be requested and commissioned, and in a short time started selling other works in their own art shows at markets, in galleries and at bars like The Bends or Blue Goose.

A special event this Friday, Full Service at The Hive, will celebrate the local artists who continue to buck convention and toil with modest or no pay to create public art. Some are newer and exciting additions to the scene, and others helped pioneer the art scene that’s getting national attention today.  The event will take place in the courtyard of a former assisted living facility in the Grand Central District.

The courtyard is abuzz with inclusion and brotherly/sisterly love. Artist Nick Kekllas, the event’s organizer, greets us and says he will display a majestic painting of his own for sale in the space he’s dubbed as “The Hive” during Friday’s event.

Kekllas has assembled worker-bee artists to work in the not-yet-really-fall daylight hours to create a tableau of original works that will surround the viewer at Friday’s outdoor art celebration. Works by Bekky Beukes and Matt Callahan (Man Made Murals) to greet attendees on the street-facing walls.

“Thanks to all the hearts who came out today,” Beukes effused on her Facebook page Saturday. “Thanks Rock Brothers Brewing Company for the beer, thanks SHINE St. Petersburg Mural Festival for food:) We are still out here, the energy is sensational. Nick made magic happen with so much talent in one spot. Stoked. Also, Sebastian (Coolidge) showed me how to wield a can ? yikes.”

Beukes was candid about the Hive wall being her first work using spray paint cans — though her intricate mural work in Tampa suggests she’d be a quick study.

Local retailers will be on hand and live music entertainment will be featured throughout Friday evening. Below are some works in progress. Artists still yet to fill out the space by Friday include Kosharek, Jeremy Trevino, Illsol, Freddy Fred, No Sleep and Andrew Spear. 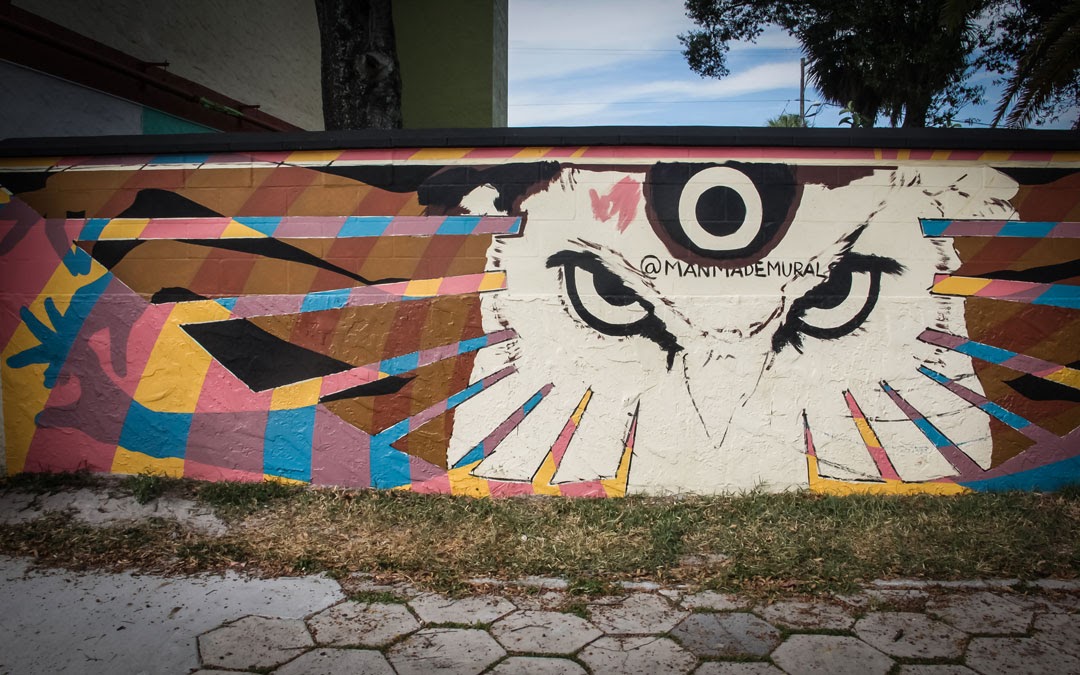 An owl at the entrance of the Hive, created by Man Made Murals, aka Matt Callahan, seems to be looking right through us. Photo: Daniel Veintimilla

Tampa-based artist Cam Parker adds detail to his mural of a woman whose culture and backstory can be interpreted by the viewer. Photo by Daniel Veintimilla. 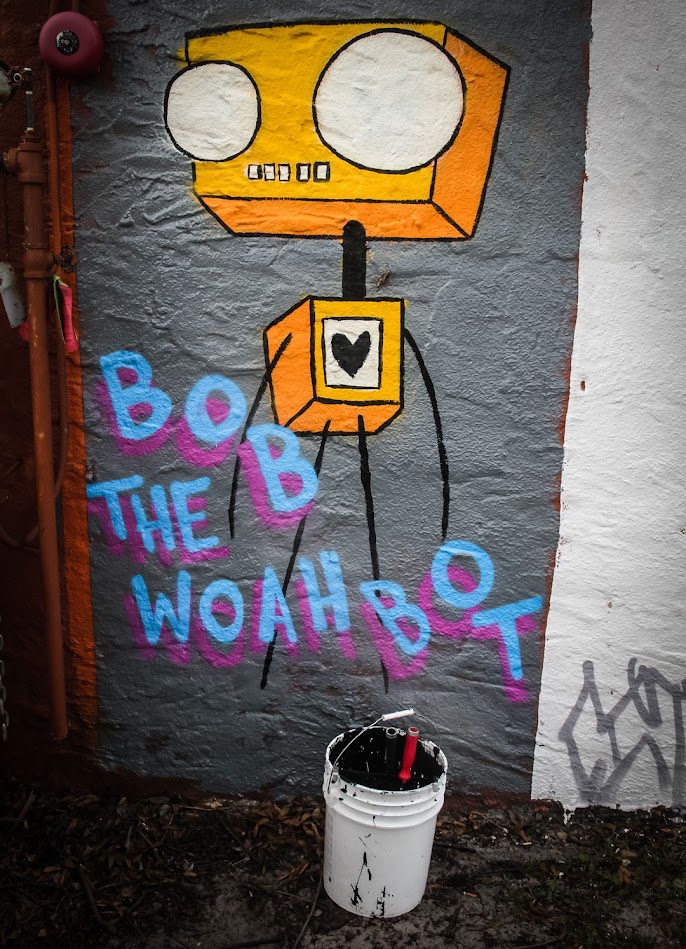 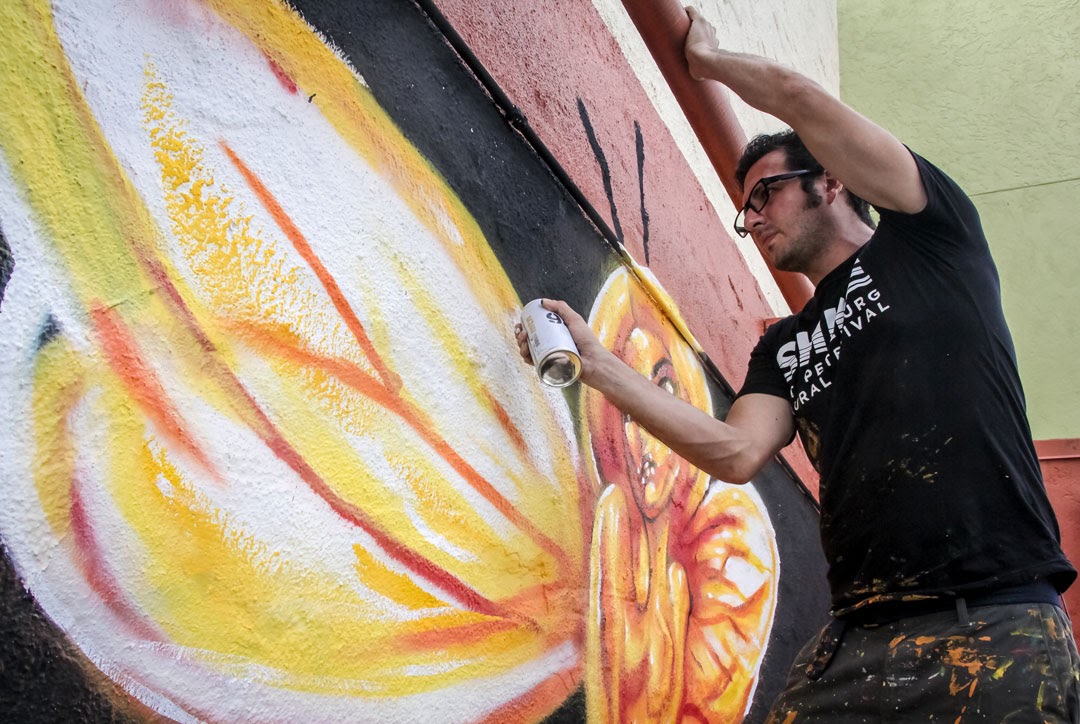 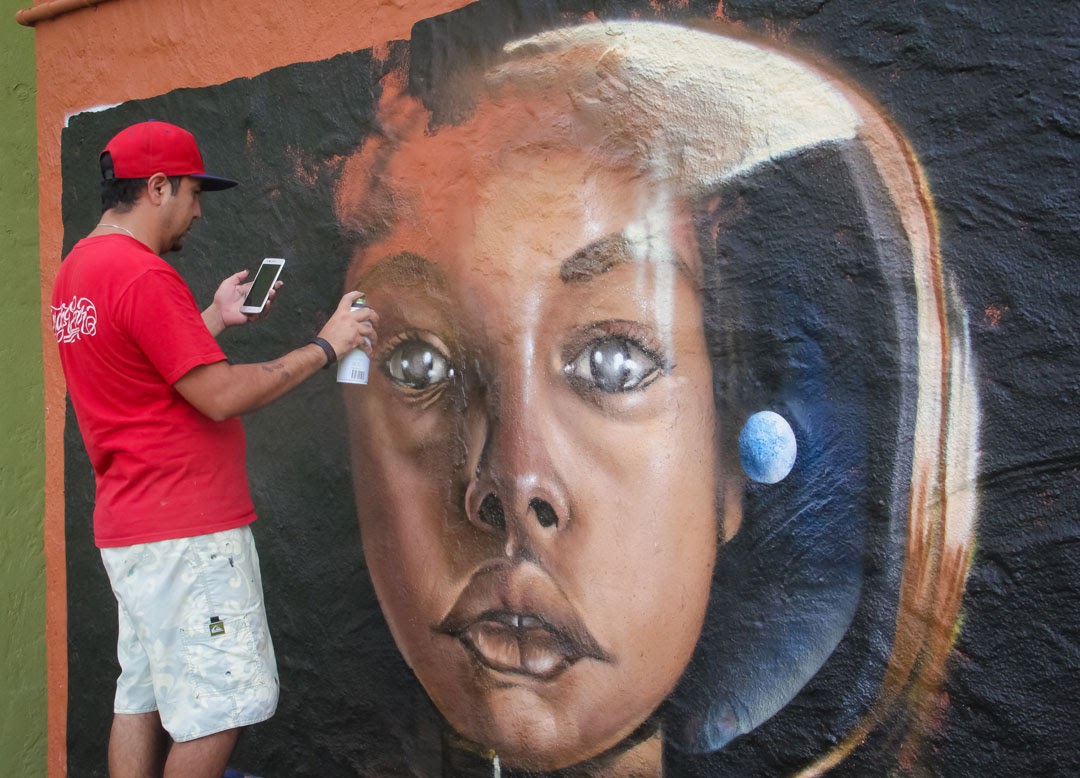 Reda adds detail to his stunningly lifelike mural inside the courtyard. Photo by Daniel Veintimilla. 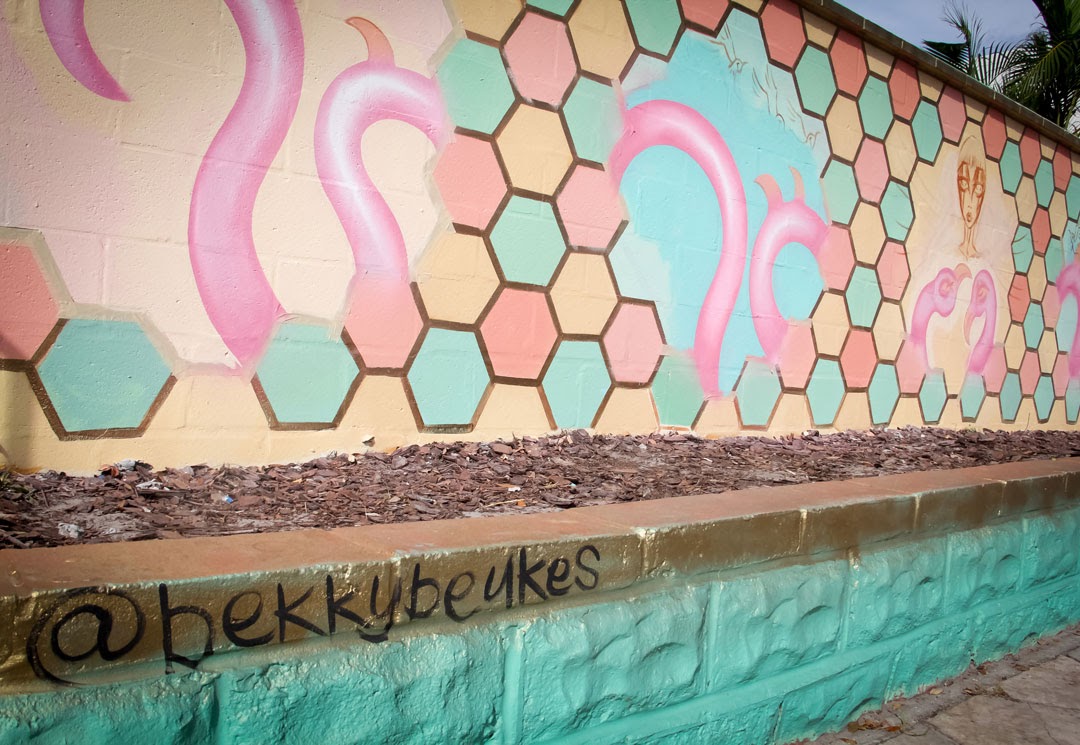 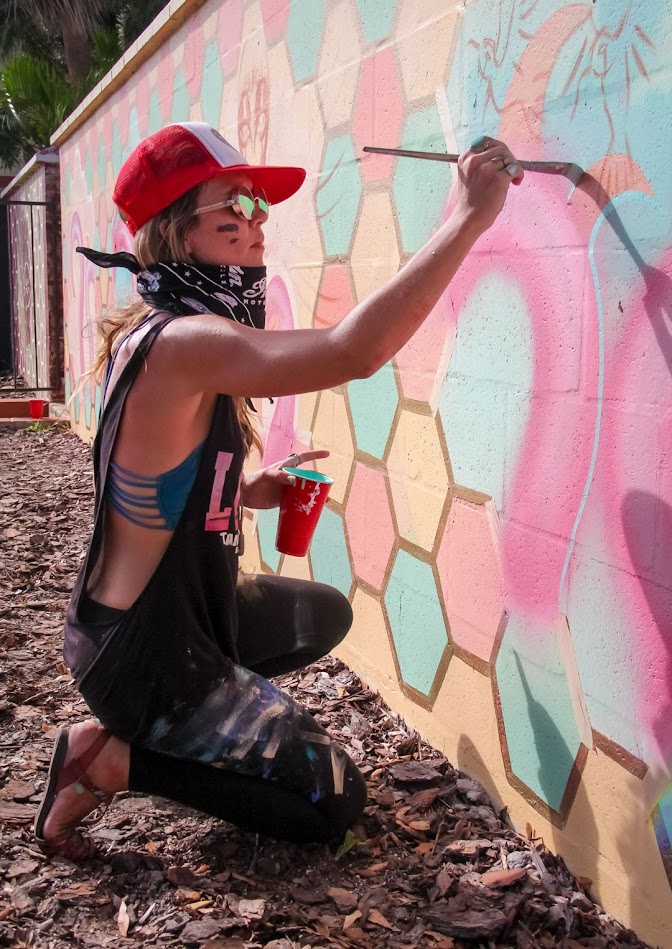 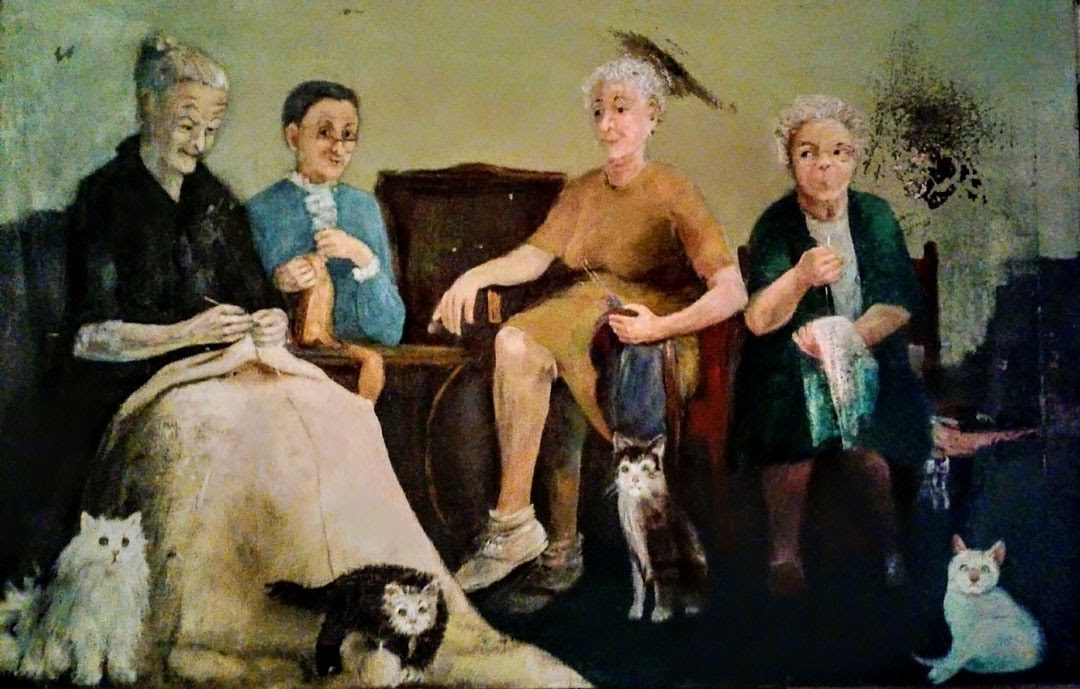 Nick Kekllas reviews a preview of his work that will be on sale during Friday’s show — a nod to the courtyard’s former life as a senior haven. Photo: Nick Kekllas Facebook. 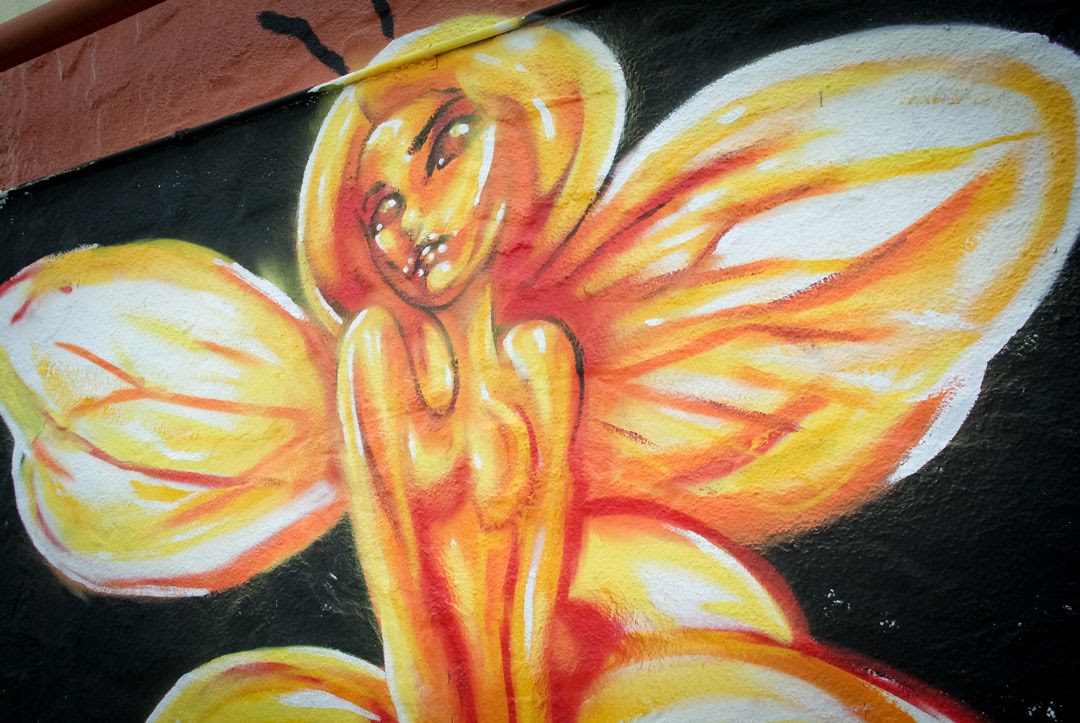 BEES IN THE HIVE | COURTYARD PARTYFOLIO

BEES IN THE HIVE | INSIDE BEKKY BEUKES’ STUDIO

In light of the artistic success of Nick Kekllas’ community gathering/mural party, (…)