Bees in the Hive | Inside Bekky Beukes’ Studio

October 23, 2017 by DANIEL VEINTIMILLA | VISUAL ARTS
Share this article with your network:

In light of the artistic success of Nick Kekllas’ community gathering/mural party, “Full Service at the Courtyard,” Creative Pinellas will be following up one-on-one with as many artists from the collective show as possible. Starting with the muralists in the “hive” and then expanding out to artist and their studios and installations throughout the Bay area, the goal is to spotlight each of the “Bees in the Hive.”

The female deities are staring with a ghost-like quality. It’s almost as if Bekky Beukes took droplets of her mysterious persona and splattered it across the canvas.

“This collection is an emotional interpretation of transition,” the South African-born artist said. “Nothing is as it seems — people change, leaves fall, ghosts remain.” 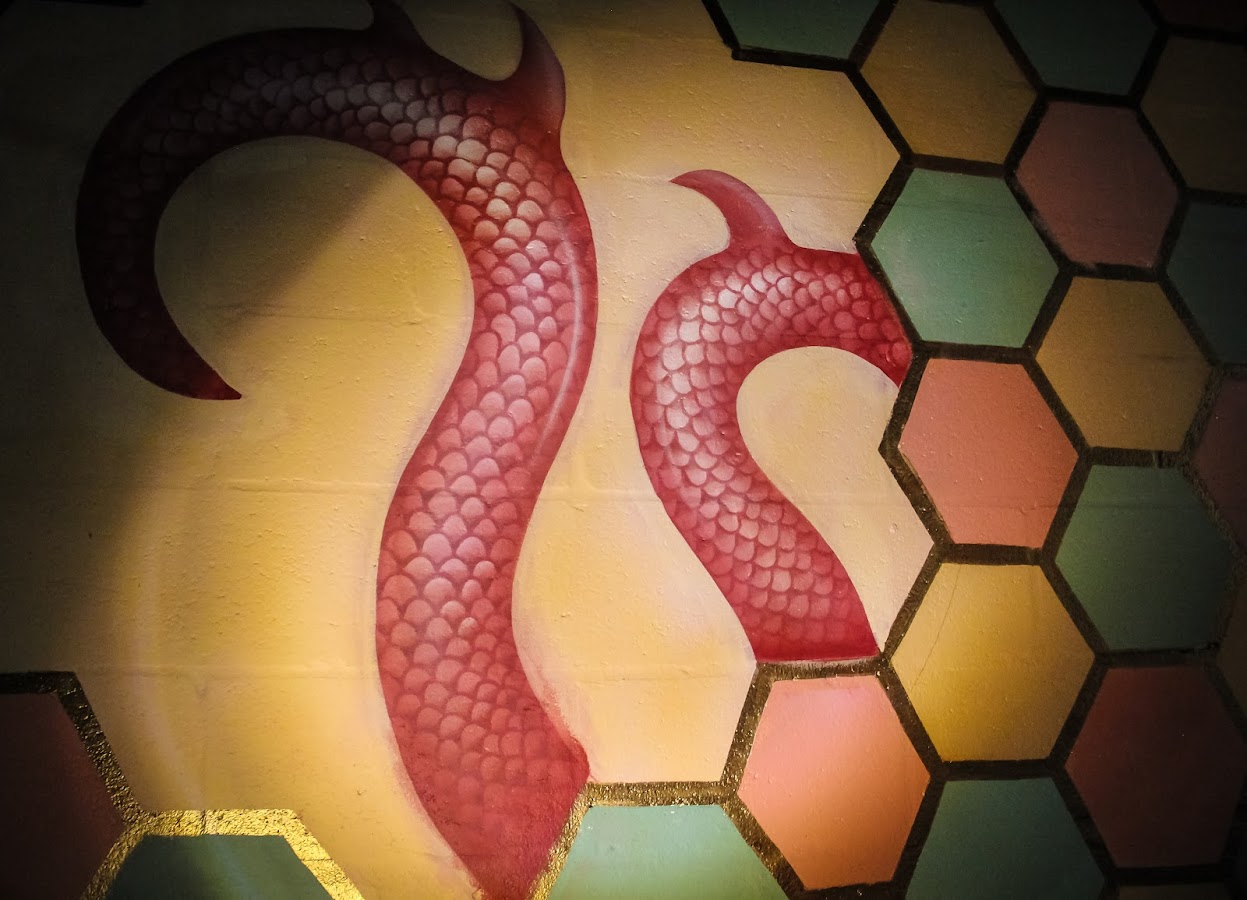 Detail of the tail of the “booby-flamingo-snake” the tail as a work in progress. You can see the careful use of color and shape, especially within the golden hexagons.

Amid the flurry of Tampa rush hour, Beukes shared that she is spending her final days in her current studio at the Ybor Art Colony, located on the floor above King Corona Cigars. She will be relocating her home and studio to Old Northeast, St. Petersburg.

While visiting Beukes in her Ybor City studio, some pioneering ideas are discussed. One, muralism needs to be respected and appreciated as its own industry with fair commissions for artists. 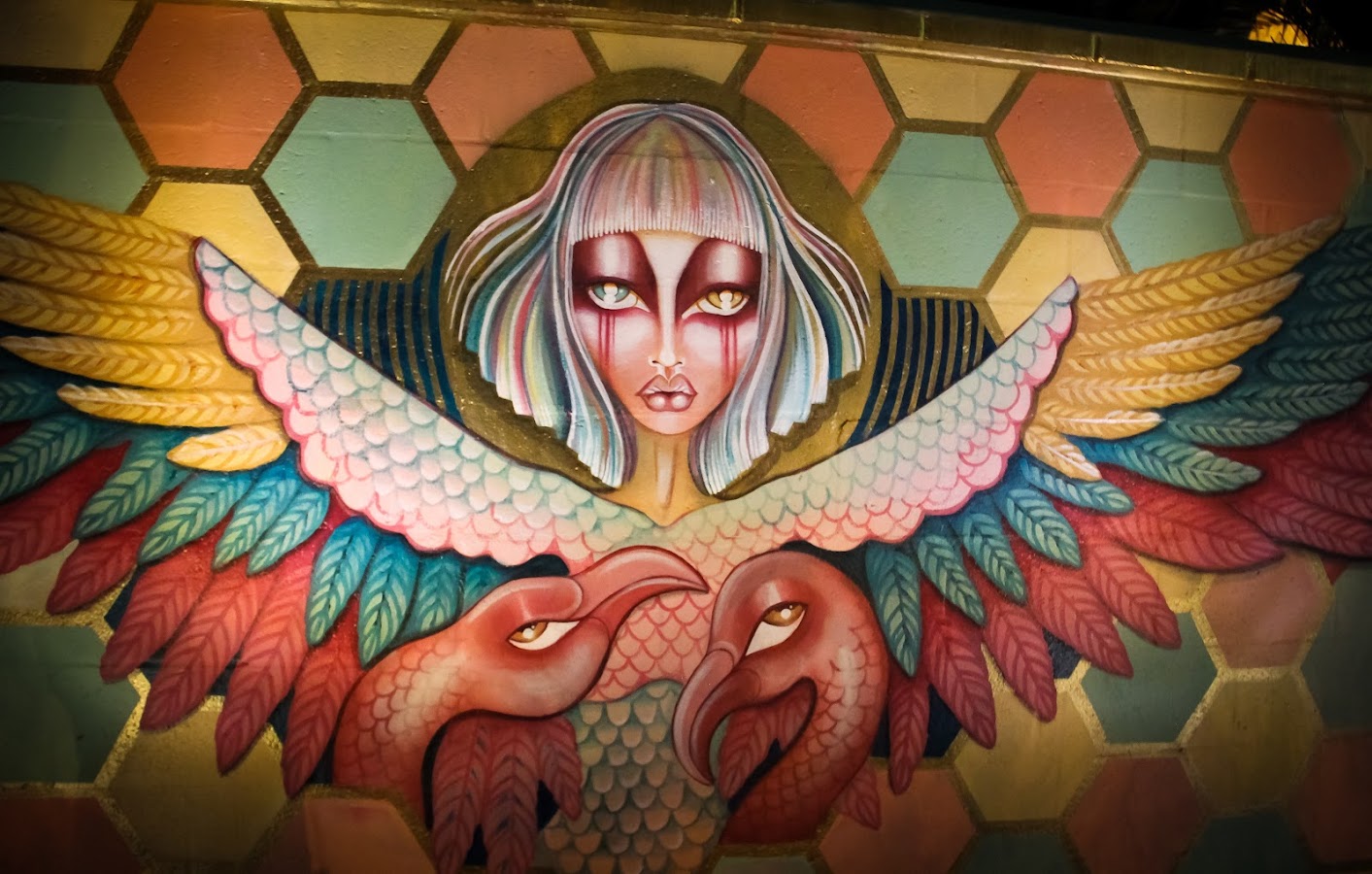 Detail of Beukes’ mural, a phoenix-like deity, on the outer wall of the “hive” in St. Pete’s Grand Central District.

Beukes comes across as a highly emphatic individual with a unique workflow. She mixes elements of her fashion design background and slightly illustrative forms with a structured sense of oil-on-canvas, achieving fine art elegance and a level of creativity that breaks through mediums. Her wonderful and monstrous female icons effuse intricate emotions.  Her art has a delicate sense of aesthetics with the subtlest strokes; you can tell she’s always pushing herself, striving for new techniques. There’s no strong lines in her universe. She loves when people can relate to her work.

In Beukes’ words, the eyes are the truth because that’s where everything is revealed; the emotions that you carry around with you. In other words, your gaze communicates the strongest feelings. Different types of stares can reveal if you are angry or sad and so on. For Beukes, more than windows for the soul, the eyes are where all the answers lie. 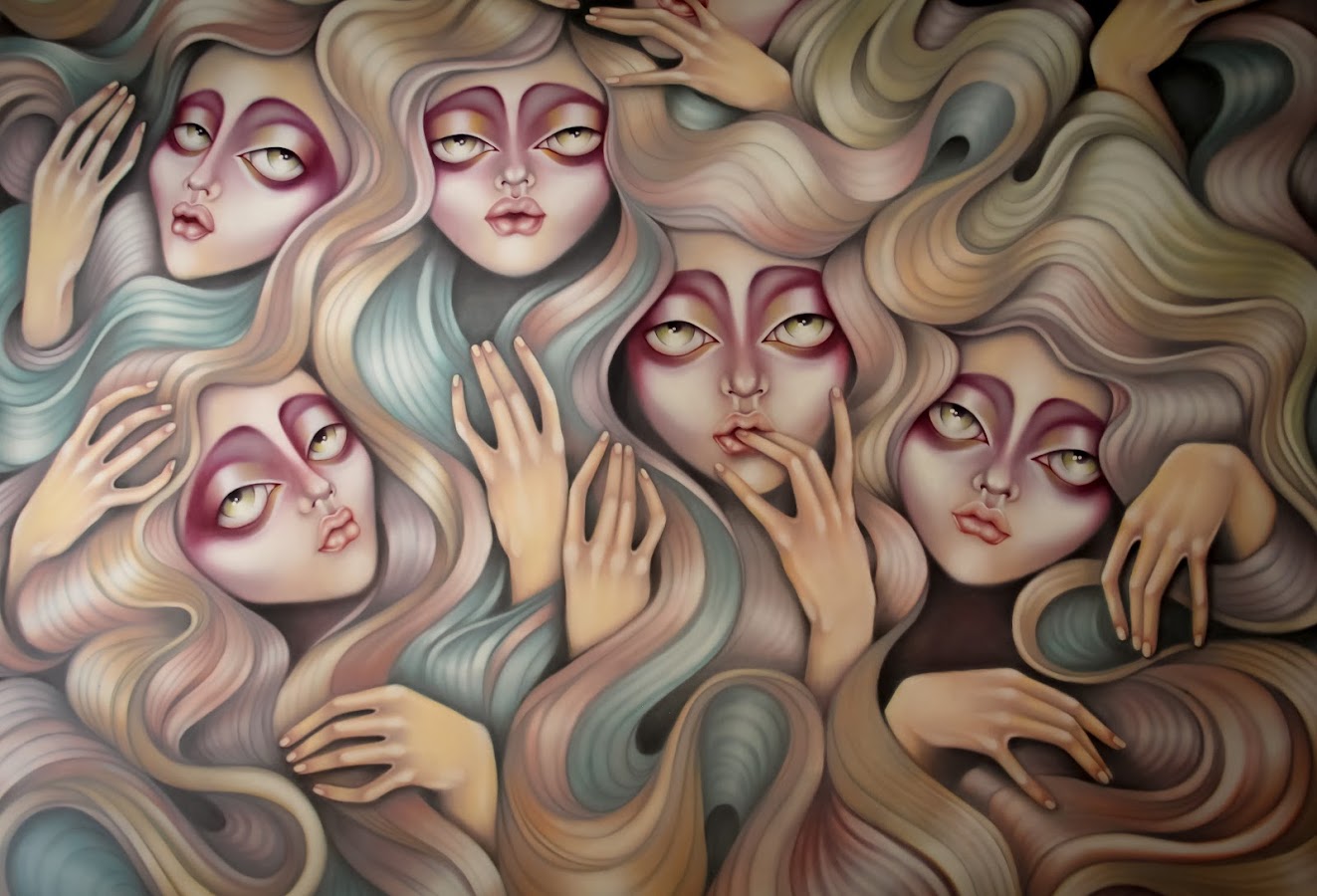 The eyes are the truth.

Essentially for Beukes, “words, words, words are just words, and they are very pretty and all, but posture and body language and specially one’s eyes can reveal our inner truth.” 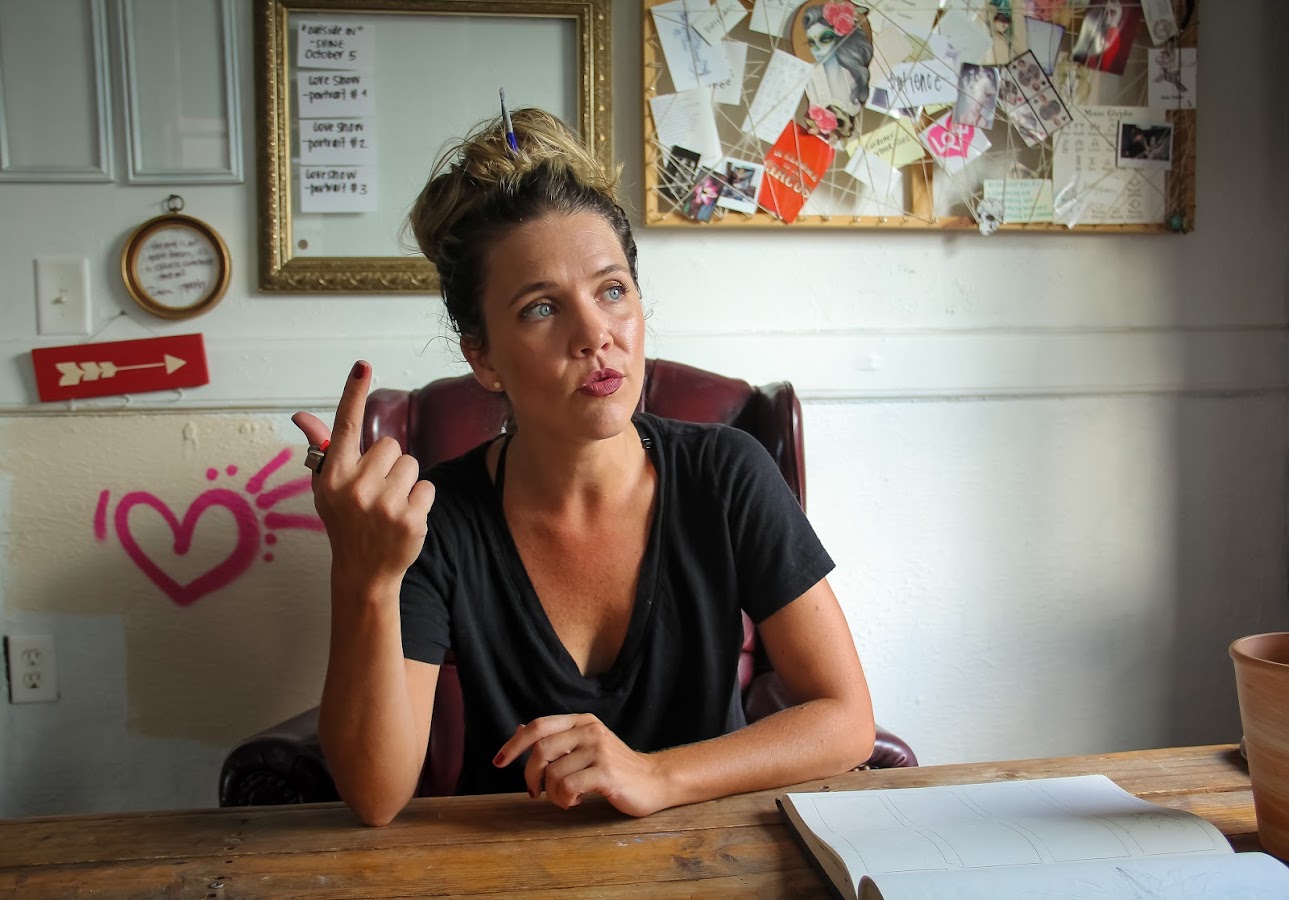 Bekky Beukes at her old studio in Ybor telling me some wise words, before her expected move to St. Pete.

Her way of drawing has become recognizable among patrons and collectors as they challenge perspectives and dimensions. Thankfully, it comes naturally for her, these elongated alpha females that seem to become almost aliens in her latest works.  Beukes revealed that her style evolves when she experiences strong emotions. For example, when she goes through heartache or a joyful time or whatever, you will see it portrayed in the work. Her lovely icons cry or laugh, or are aloof, or even sensual sometimes. 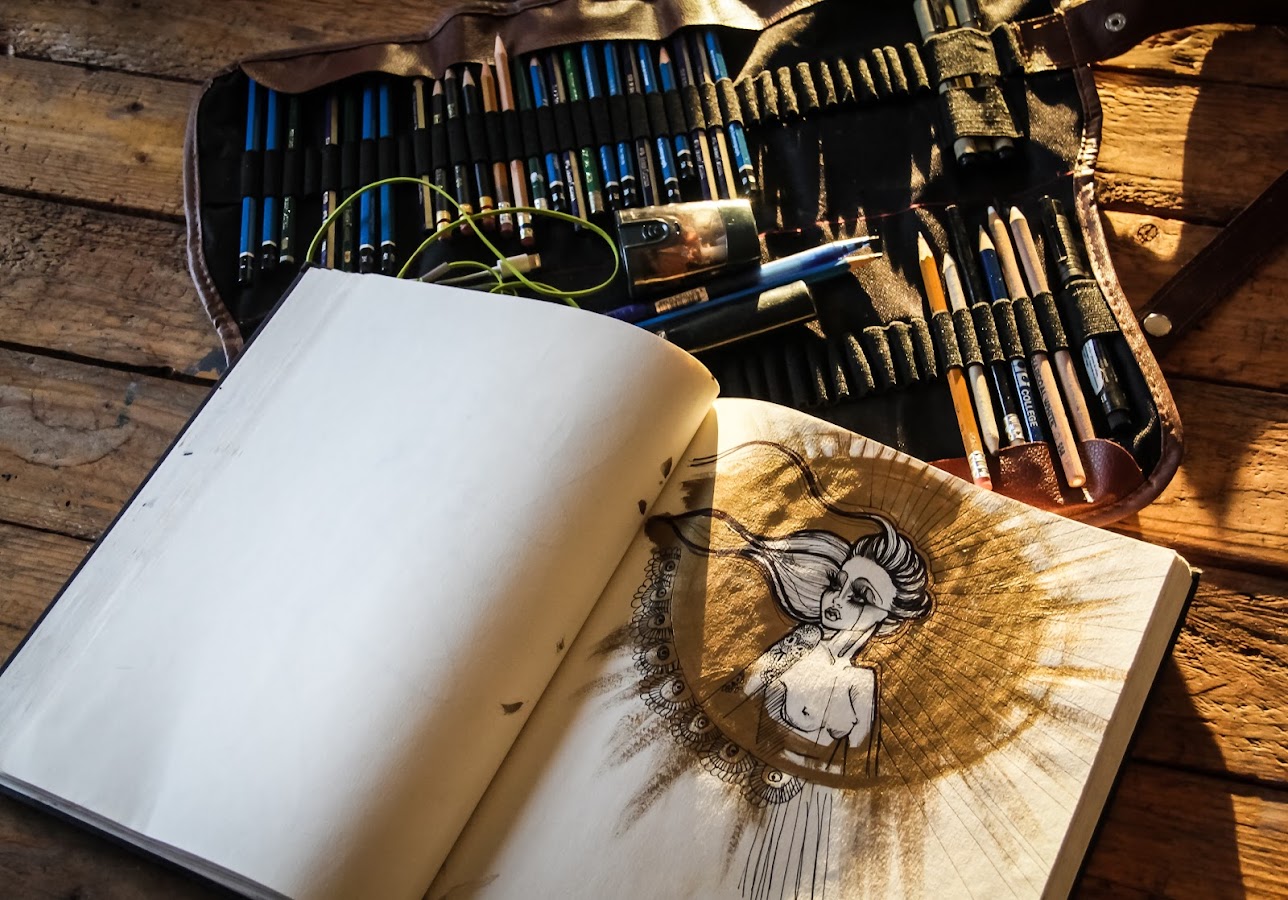 Beukes confessed that she’s preparing for a very dark show in December. We all have had a pretty trying year, so I’m sure we can all relate to some of her more sorrowful works. But she also said, that it is going to have hopeful elements, fantastic elements, and she’s trying not to hold back with her multitude of moods and technical expressions. For instance, she enjoys combining animals and textures with the female icons, like the mural at the hive party. Always with a unique sense of fantasy and the love of creating a beautiful world, Beukes engages the viewer with a sense of discovery and magical realism. 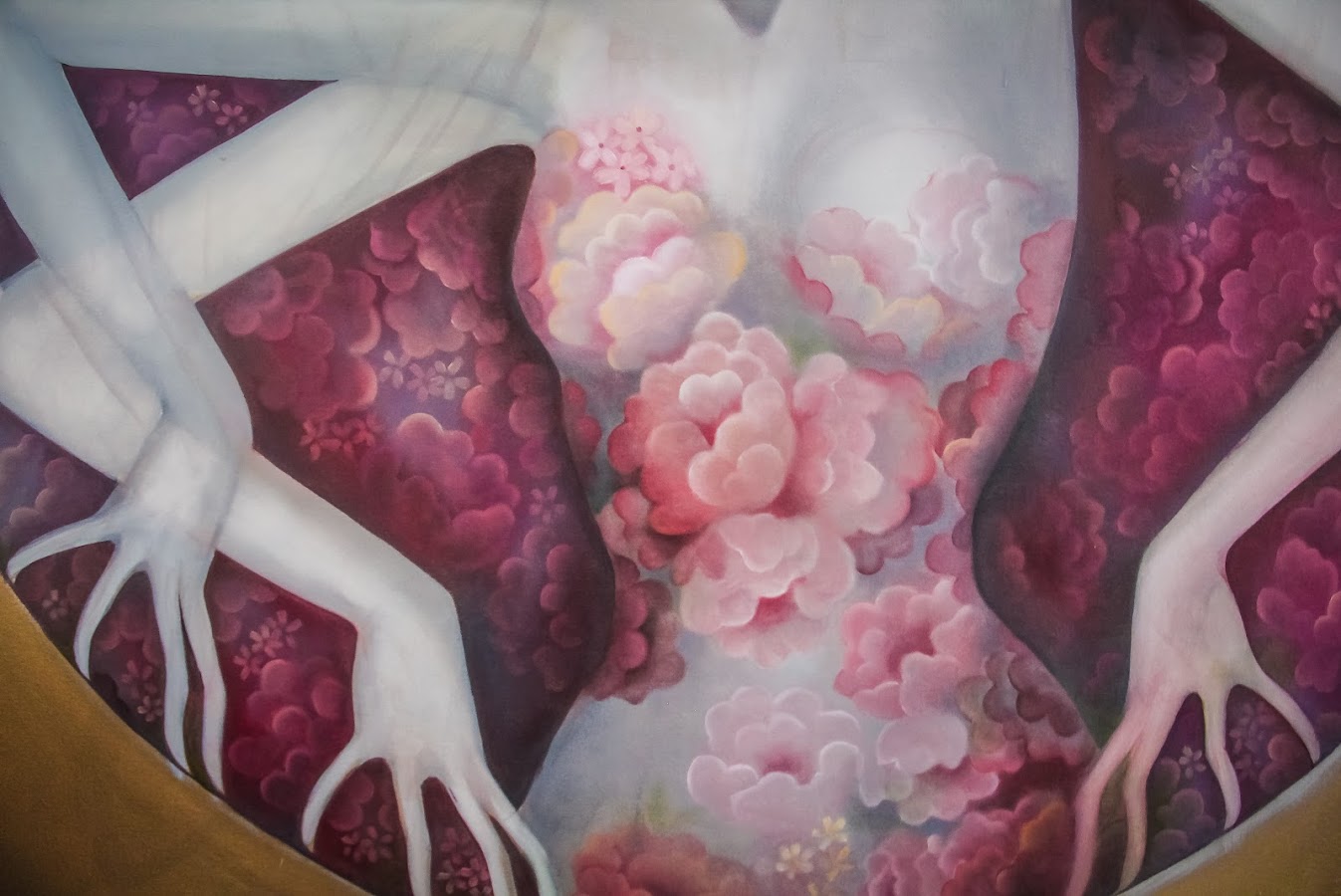 Clear sense of balance and texturing.

Beukes’ series seems to suggest a journey or sequential chain of events from “facing and suffering the negative storm through a bloodstained battlefield,” to the renaissance or rebirth, like the phoenix who rediscovers bliss.

BY JULIE GARISTO | PERFORMING ARTS, THINGS TO DO, VISUAL ARTS