Bees in the Hive | Depth and Gems with Daniel Barojas

January 21, 2018 by DANIEL VEINTIMILLA | VISUAL ARTS
Share this article with your network:
Analyzing Chroma Depth and Geology with Daniel Barojas

Daniel “R5” Barojas seems like a grateful guy, and very in tune with his artistic endeavors. Inspired by the momentum of the St. Petersburg and Pinellas art communities, he has been producing more art since his move four years ago. He credits friend Chad Mize for giving him opportunities to expose his work and has gotten exposure through Black Amethyst Tattoo and the former Bloom Art Center. He says he feels lucky and glad to had been able to participate in the local art world and meet people like Chris Parks, aka Pale Horse, another friend in the scene.

“I’ve always liked creating things since I was a kid,” Barojas said. “When I was a kid I wanted to be an astronaut carpenter.” In reality, he has always enjoyed creating something substantial. Barojas started his artist endeavors drawing and doing art and photography since high school. He also says graffiti subcultures influenced his visual and graphical sense along with skateboarding. He laid the groundwork for his art foundations at the Maryland Institute College of Art for two years and then he studied and Associates in photography in Mexico.  To later tack on a Bachelors in design on US grounds. 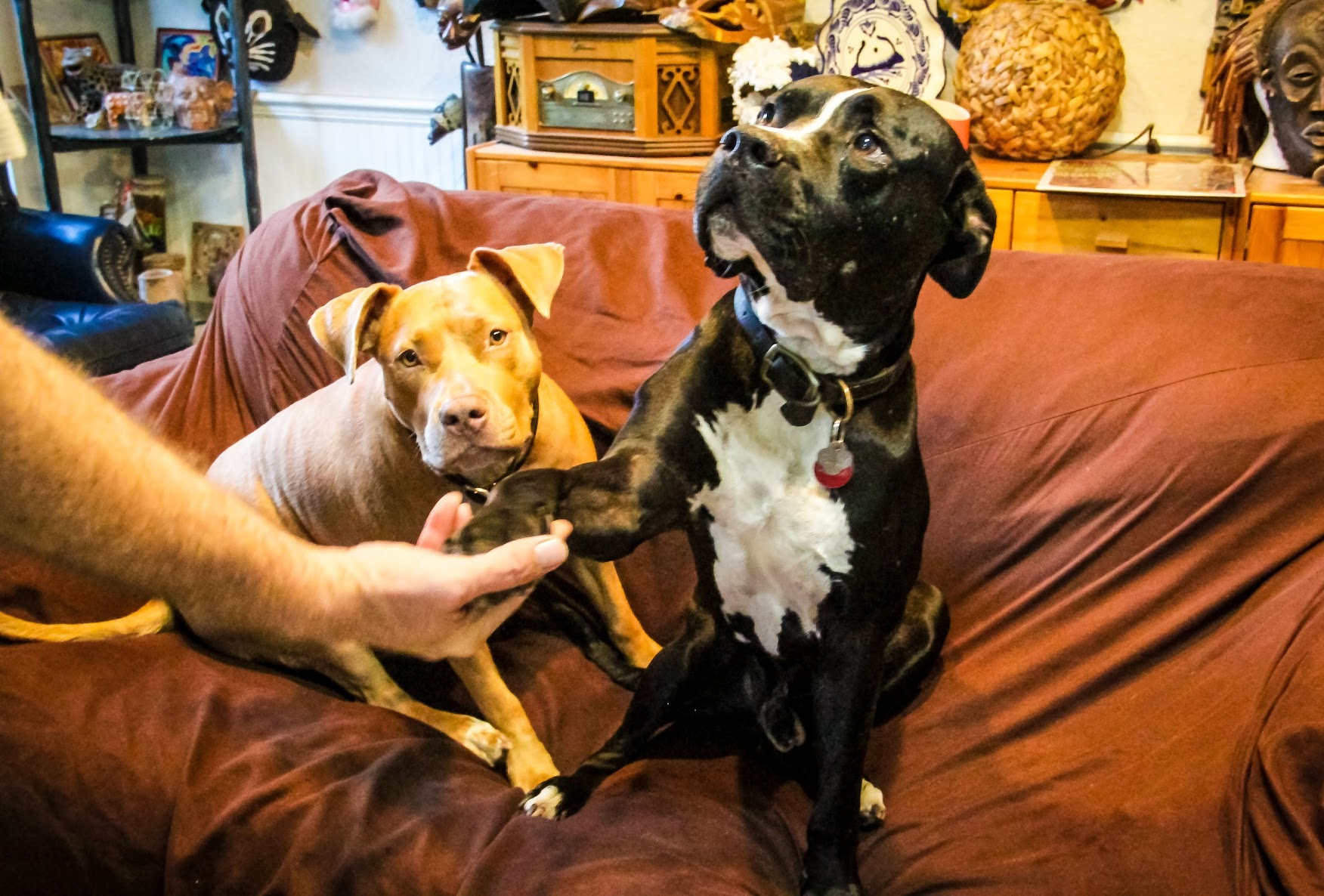 Ginger bread behind looking straight at the camera and Onyx giving paw to Barojas.

At home, the multi-talented artist has a close bond with his rescue Pitbulls. Mr. and Ms. Onyx and Ginger Bread who are the true owners of the Barojas household.

We ventured to his collections and Barojas showed me his personal piece from the Screaming Hand show, the touring exhibition presented by Vans. Barojas skated a lot in his youth and still skateboards once in a while, and follows the subculture. His Screaming Hand piece was invited to show at the Museum of Art and History in Santa Cruz, California, the final closing Screaming Hand show. And it was featured at former and dearly missed art gallery and working space, Bloom. 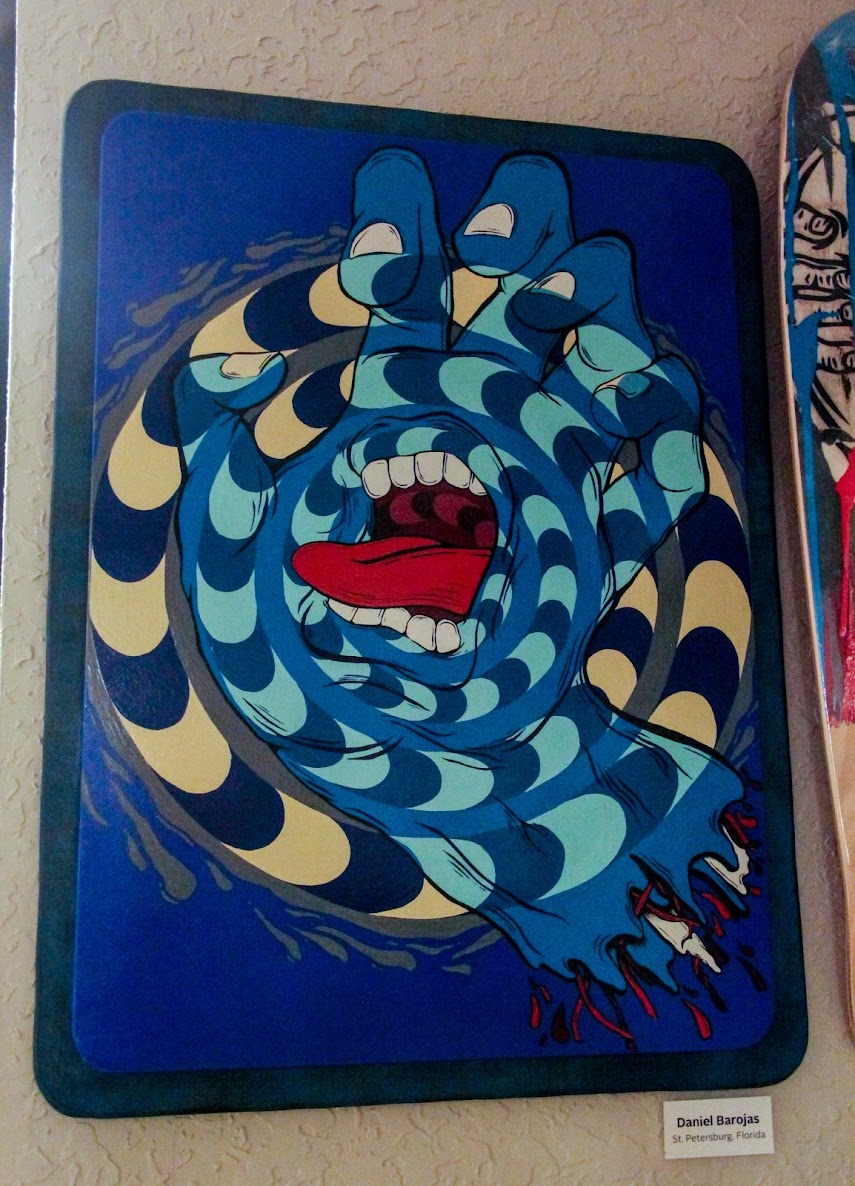 The square patterns on some of Barojas paintings and murals attracted me. “I’ve been trying to start a dialogue and incorporate optical illusions in much of my work,” he explained, some of his newer pieces maintain a visual depth. He positions squared hue variations to be viewed with ChromaDepth 3D glasses, which separate the color spectrum and give colorful pictures the illusion of 3D.

I also got to meet his wife, Ganesha, who was welcoming and cordial. Originally from Bolivia. We talked about St. Pete, and how it has changed, how she felt that she likes a smaller art scene that’s more integrated. We agreed that when the scene grows it divides itself and fragments because of gentrification. And thankfully St. Pete scene is still somehow put nicely together. She also mentioned the intangible goods of having an artistic community and that it’s not all about the money. It’s more about meeting like-minded people and making St. Pete an artistic destination.

In 2017, Daniel Barojas got a grant from the St. Petersburg Arts Alliance to create the massive mural at the Academy of Ballet Arts. 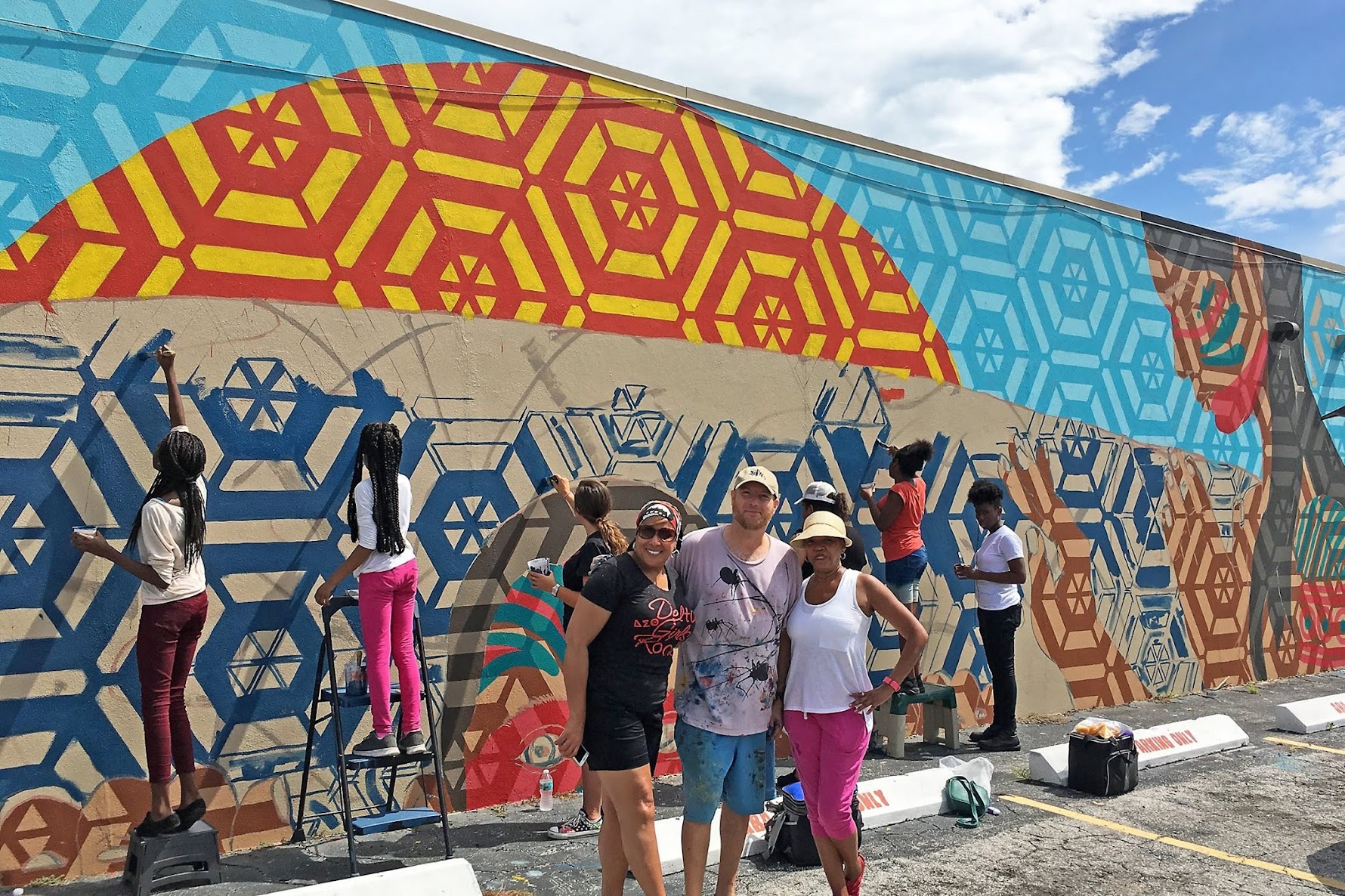 The Chromadepth-enhanced mural covers the huge back wall of the warehouse; its theme: the Tocobaga Indians, a personal interpretation of them. Barojas tells me that it’s a tribute to them, as the first inhabitants of this lands. To give homage to them as well as all of our ancestors. The mural consists of a man and a woman praying, and there’s a kid in the middle, peaking out in front. The project enabled him to engage with the community, recruiting students from Academy Prep Center of St. Petersburg to help him paint. I must mention that their participation could not have been possible without the involvement of the Dr. Carter G. Woodson African American Museum in tandem with the SPAA.

Some of the love for art and inspiration Barojas gathered from a great artistic environment at home.  His uncle is a well-known art collector from Mexico, none other than Andrés Blaisten. The Andrés Blaisten collection started in the ’70s and has become globally recognized as one of the biggest and most complete collections of Mexican art in the world. There’s a whole museum you can visit, with an impressive variety of work. 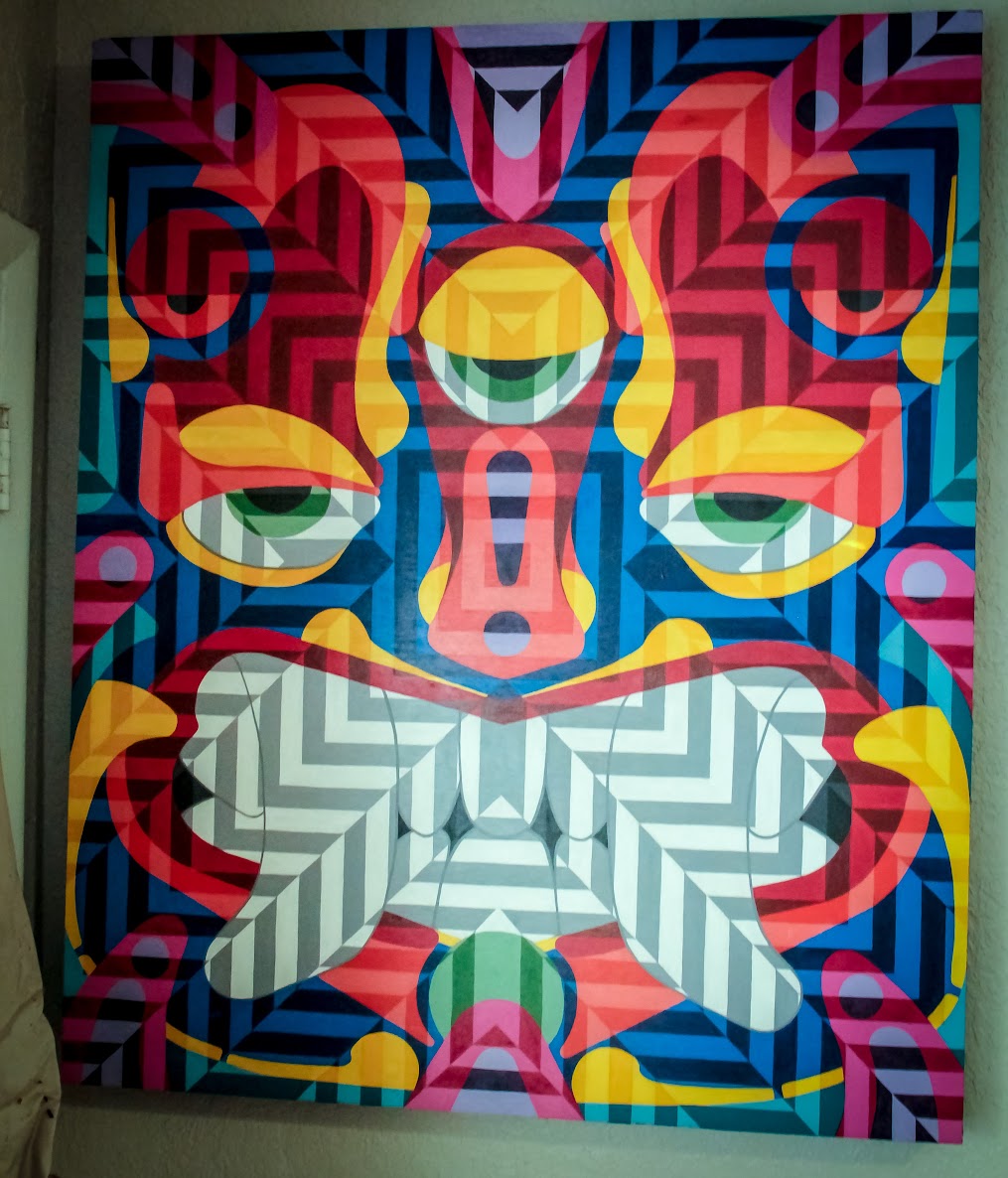 Barojas’ work has also been featured in the Outside/ in show, the Grand Finale of SHINE. He showed me the painting with the floating eyes, which featured at Behar + Peteranecz Architecture. Also, part of SHINE St. Petersburg Mural Festival, he got to do another mural behind Green Bench Brewery with similar native spiritual inspiration and optical illusions.

As I started to photograph his work, he emphasized that he really likes Tlaloc the god of rain, lightning and thunder. He is a fertility god, but also a wrathful deity, responsible for both floods and droughts. Tlaloc is commonly depicted as a goggle-eyed blue being with jaguar fangs. 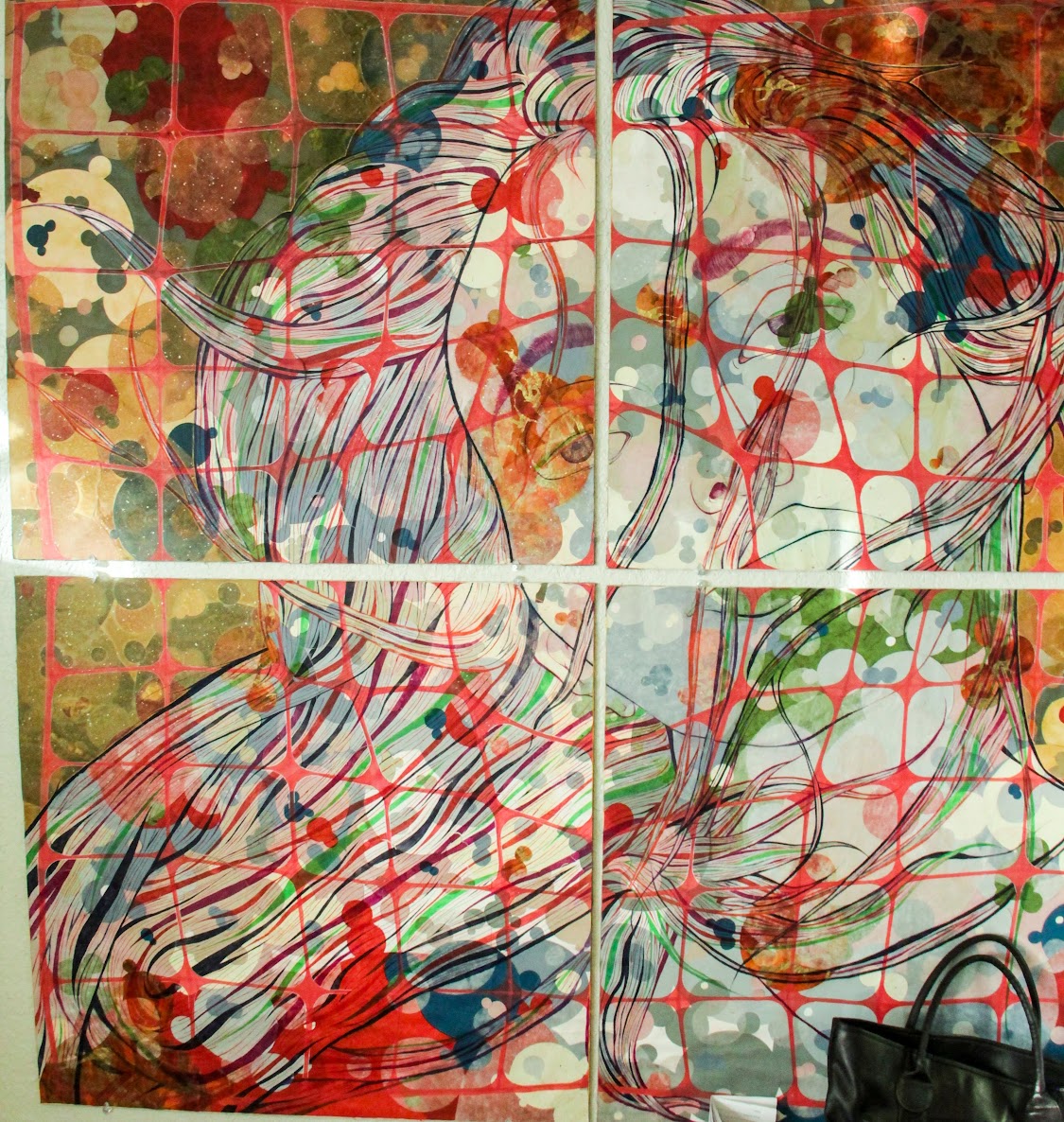 Then we talked about an older interesting piece that is a mix of collage illustrated with circles that have different textures. Very abstract, but as you view the entire image, you’ll notice that a woman’s face behind a modern red mesh. It also works with the Chromadepth technology but was not painted with those precise color patterns in mind.  It’s a watercolor with collage to give that hidden effect; each circle is like a red bubble. Ganesha pointed out a movement from water to fire. Which, in a way are opposites. Water versus Fire. 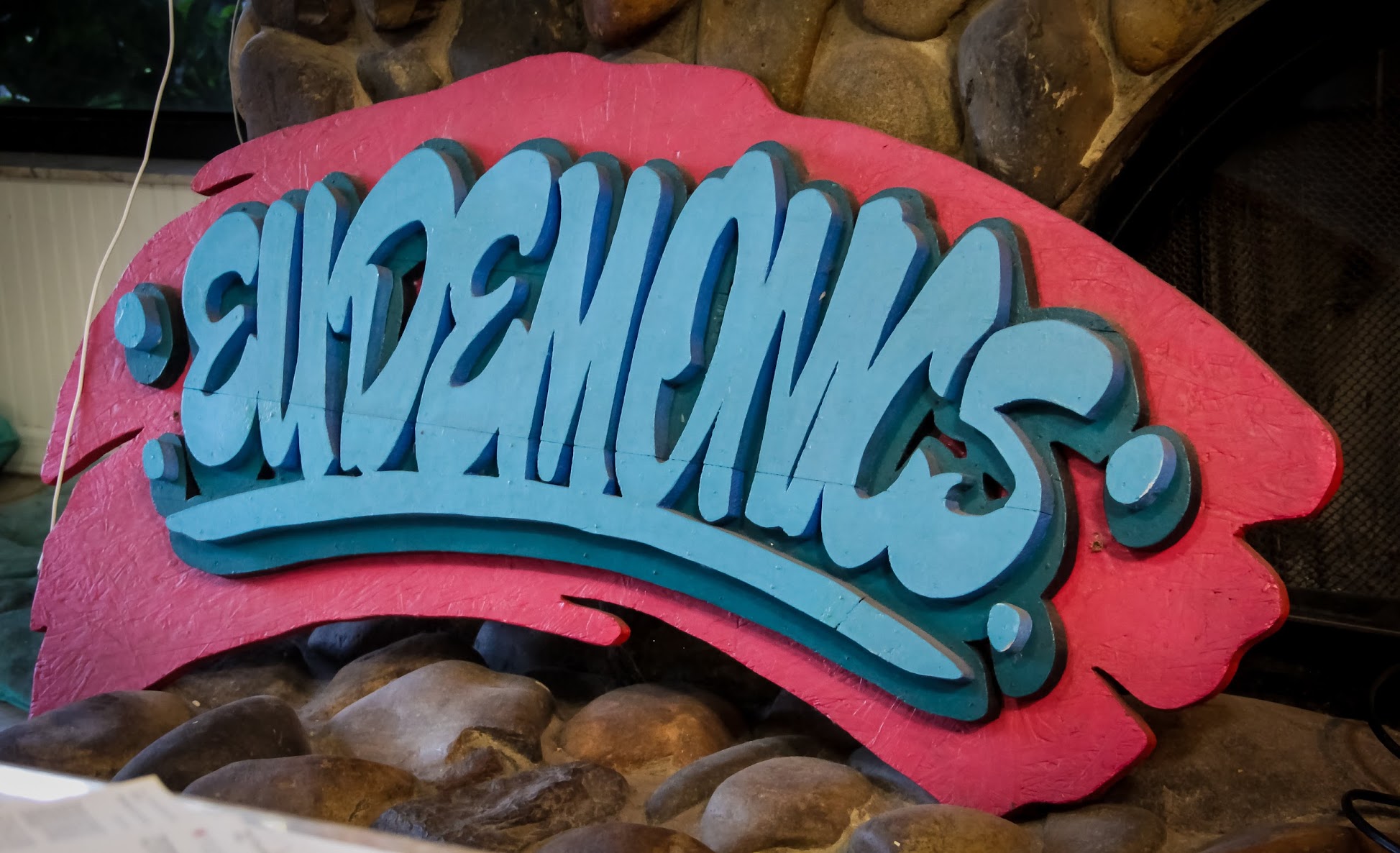 The science of happiness.

We also discussed a handmade wood sculpture of a word, “Eudemonics” translates as the science of happiness. It almost looks like fiberglass. Barojas cut wood with a laser jigsaw. 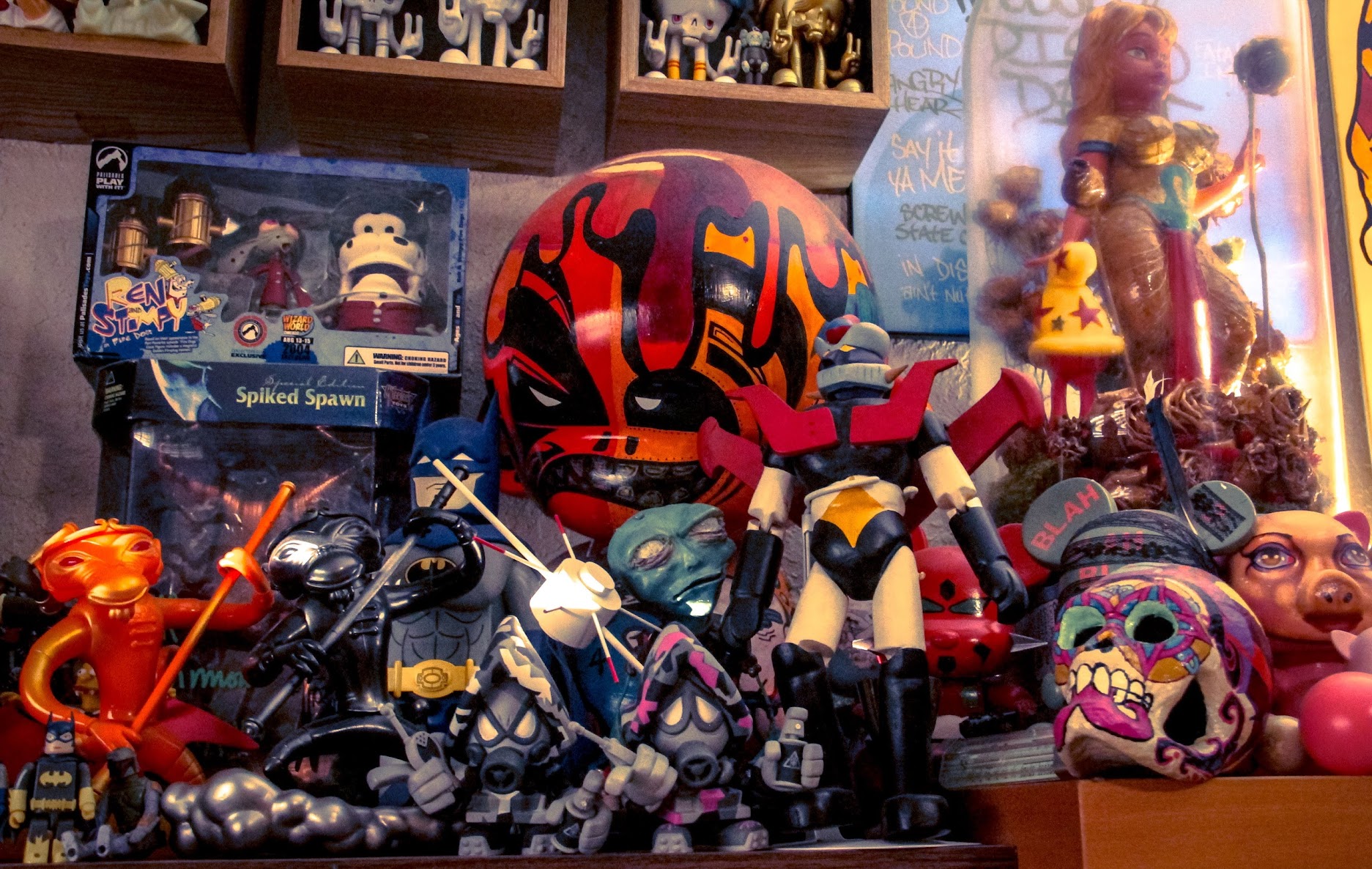 Barojas showed me his huge toy collection and his interesting handmade ritualistic looking necklaces in all sizes. I noticed that several necklaces have carved skulls beads made from various stones and also some in bone.

But of all his collections his most impressive was his semi-precious stones. Barojas has an extensive geologic knowledge and a true love for geological beauty. Obsidians, ambers, crystals of all kinds, corals, turquoises, jades and agates, just to name a few. The highlights were the Enhydro crystals i mentioned in the featured image caption. Fulgurite, he explains, is a form of fused silica, formed by a lightning strike onto sandy soil or sand. There is an enormous release of energy into the area where the strike occurs, so hot that the sand is instantly melted onto a type of natural glass. 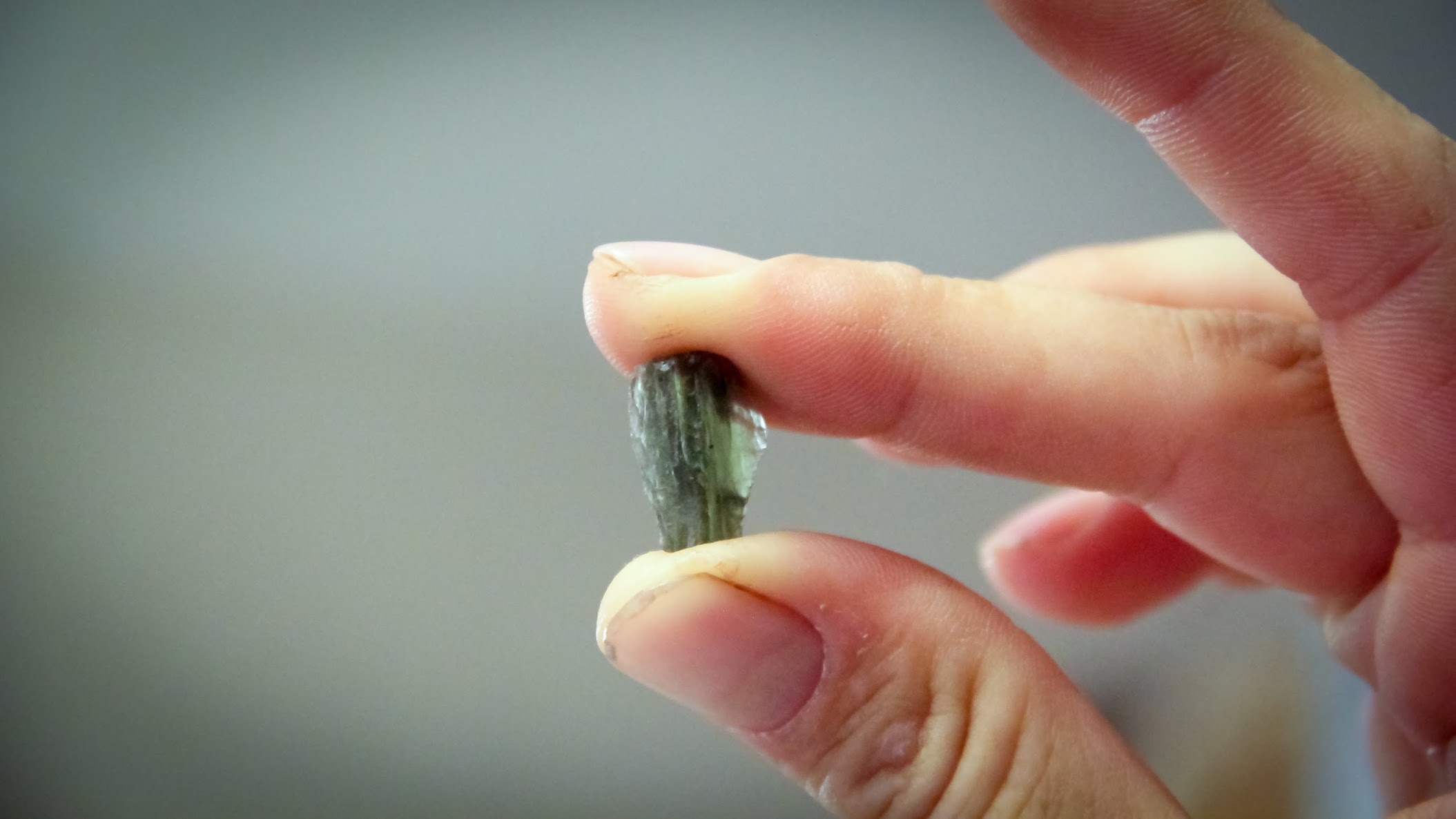 Moldavite (Czech: Vltavín) is a forest green, olive green or blue-greenish  projectile rock formed by a meteorite impact in southern Germany (Nördlinger Ries Crater). It is a type of tektite. A coprolite is fossilized feces. Coprolites are classified as trace fossils as opposed to body fossils, as they give evidence for the animal’s behavior.

Looking toward the future, Barojas has an opportunity to show his work in Bolivia, in the Contemporary Art Museum. So he is trying to find a way to bring his artwork all the way over there, especially now with his theme of mixing cultural traditions with his design background. 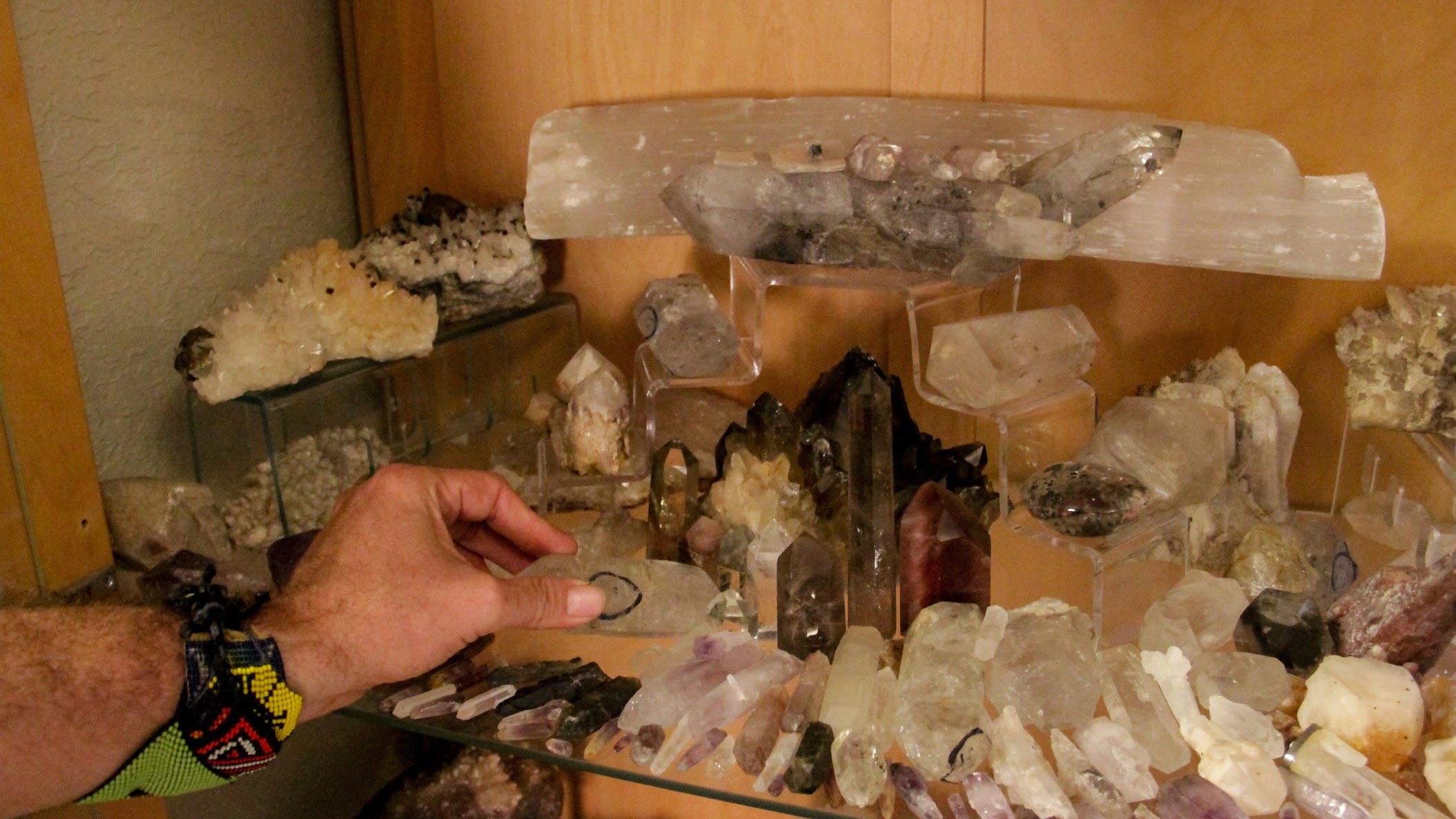 Four years ago, Feld Entertainment bought the second largest building in Florida, in Palmetto, near the Ellenton outlet mall. That’s why Barojas moved to the area; his department moved from Virginia. Thankfully, Barojas’ incisive eye has become a force in the local arts scene, and we’re looking forward to more optical illusions and visual gems from the hard-working artist and collector.

Although that’s not all Barojas has on store, be sure to grab a pair of Chromadepth 3D glasses to see some of Barojas’ work on a whole other level.

All Photos by Daniel Veintimilla unless noted.

What an incredible effort by all the SHINE organizers, supporters and artists. With a (…)