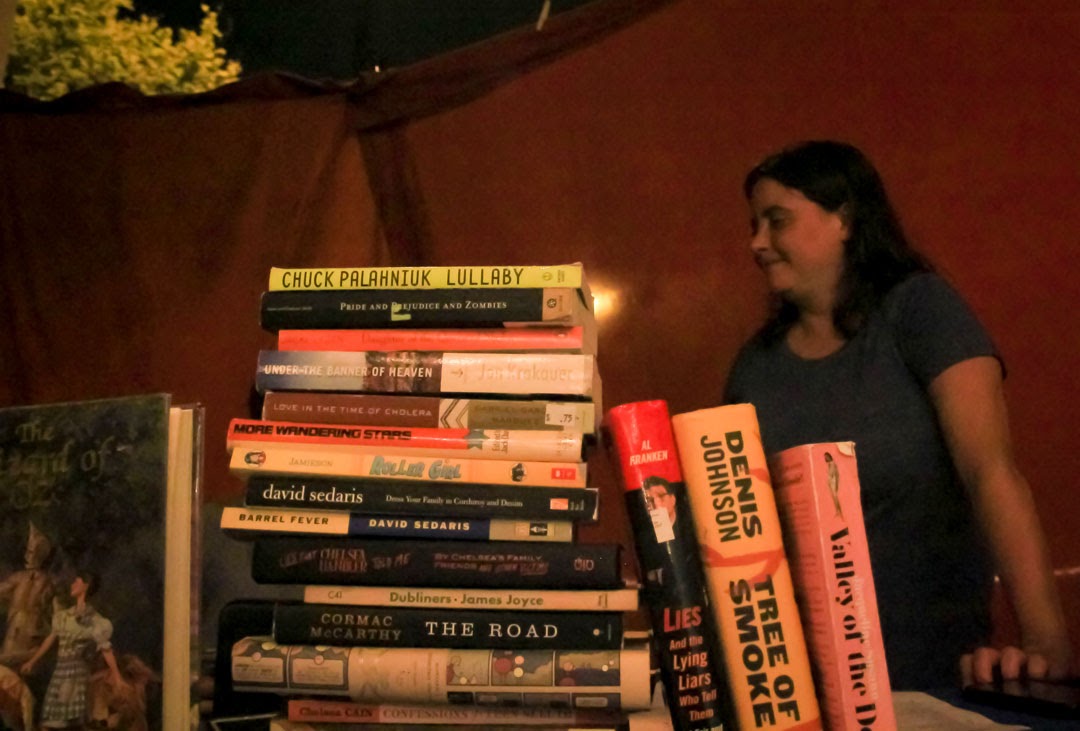 Wordier Than Thou President Tiffany Razzano at the admissions table, decked out with banned books for sale. Photo: Daniel Veintimilla

Because promoting literacy is a tough sell in an ADD-addled society preoccupied with Netflix bingeing and cat memes, it doesn’t hurt to add a little tasteful T&A to further the cause.

Presented by Wordier Than Thou and Exquisite Entertainers, the Banned Books Burlesque dancers have once again dug their stiletto heel through stereotypes, proving that high culture and boisterous humor can go hand in hand. They also showed us that alternative live performance  is indeed alive and well in Largo. 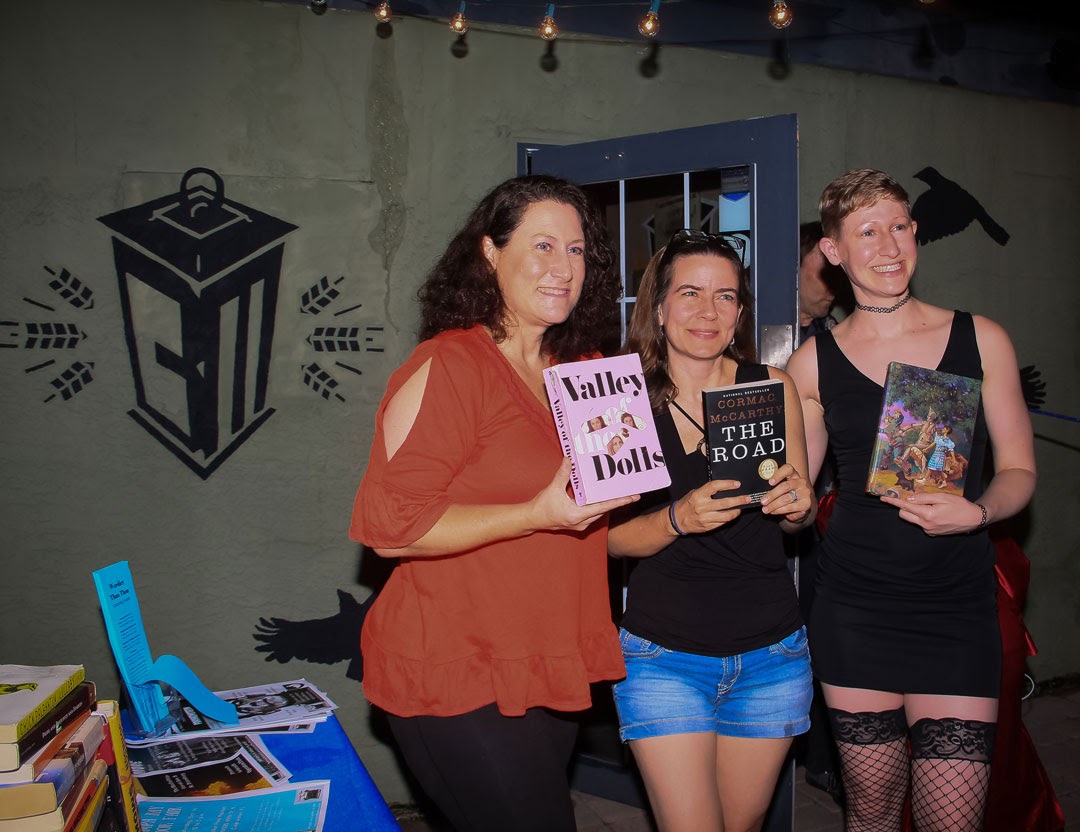 “We’re really proud of this three-year running production,” said  Mayven Missbehavin, dancer, event emcee and owner of Exquisite Entertainers. “Those attending will get to experience an up-close and personal burlesque experience that incorporates some of the performers’ favorite banned books.”

And that the crowd did. The dancers entertained the packed patio at Barley Mow with razzle dazzle and surprises. Decked out in elaborately themed costumes, tastefully taken off to amusingly themed music of all genres, performers helped educate the public on works that had been banned by books and/or libraries for content deemed too provocative for young readers as well as adults.

Some selections came as a surprise, such as Harry Potter and For Whom the Bell Tolls. The entire Banned Burlesque act was amply entertaining, offering sassy humor, impressive show-woman-ship, shimmies and shakes. 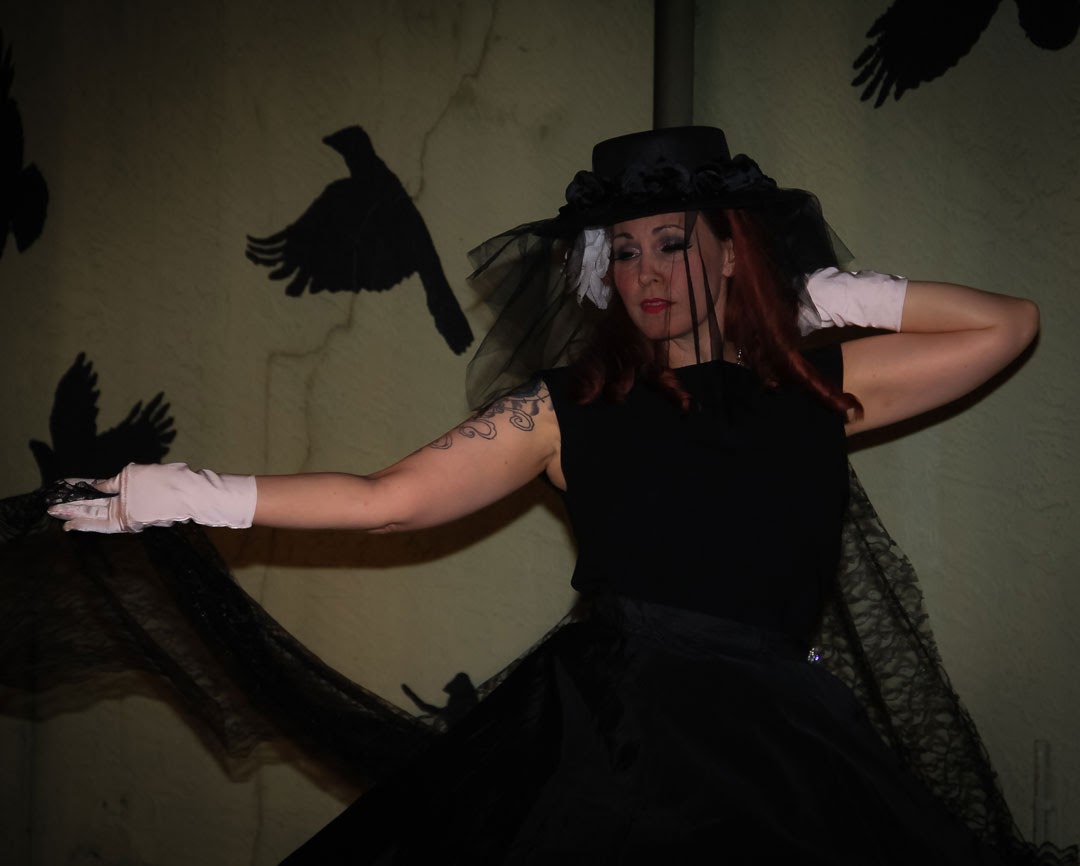 Ruby Vesper begins her dance to The Secret Garden in funeral garb, reflective of the story’s mournful child at the beginning of the story. Photo: Daniel Veintimilla

“Dinah Fire is our stage kitten and performed for the first time at this show,” shared Mayven. “We brought the show to the Deckle Edge Literary Festival in South Carolina two years ago, and plan to reach out to other literary festivals and conferences so we can bring this show on the road in the future.”

Since their first Banned Books Burlesque Show three years ago, the events have become one of Wordier Than Thou’s most popular events, adds Wordier Than Thou’s founder/president Tiffany Razzano. “For the past two years, this show has been runner-up Best Literary Event in Creative Loafing’s Best of the Bay awards.”

Razzano also recounted to Creative Pinellas how she and the burlesque troupe joined forces: “Mayven was one of the first people I befriended when I first moved here from New York, about nine years ago. So when I came up with the idea for a Banned Books Burlesque Show to celebrate National Banned Books Week, I immediately brought the idea to her. She loved it – and so do our performers – and the rest is history.”

Mayven ended the show with a toast to performer Vita DeVoid, who recently left Tampa Bay to work on the West Coast.

List of this year’s works featured by Banned Burlesque – The Adventures of Tom Sawyer, For Whom the Bell Tolls, James and the Giant Peach, Harry Potter, Where the Sidewalk Ends, The Secret Garden and The Scarlet Letter. 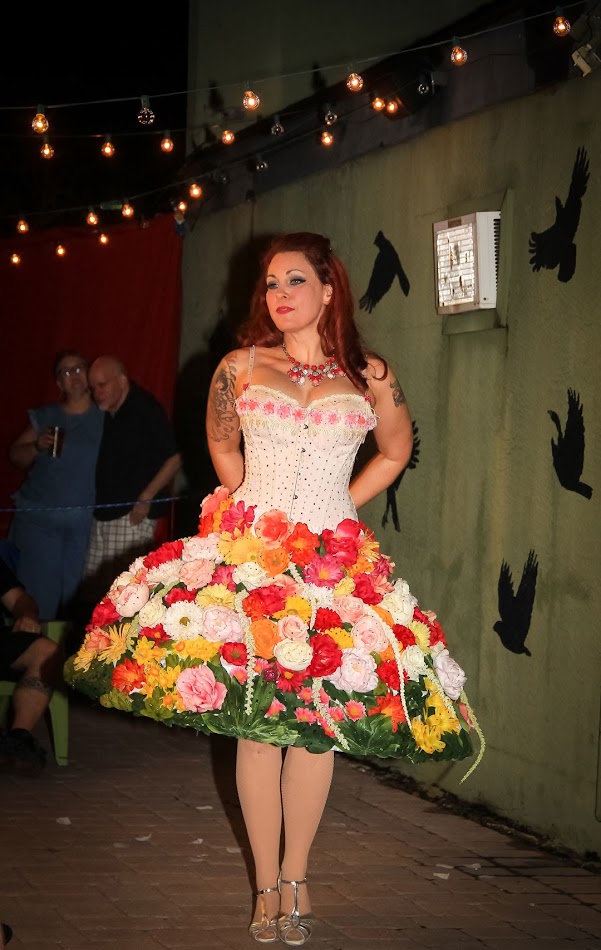 After stripping off the funeral garb, Ruby Vesper shows the beautiful blooms in The Secret Garden. The book has been derided for classist, racist sentiments. Photo: Daniel Veintimilla 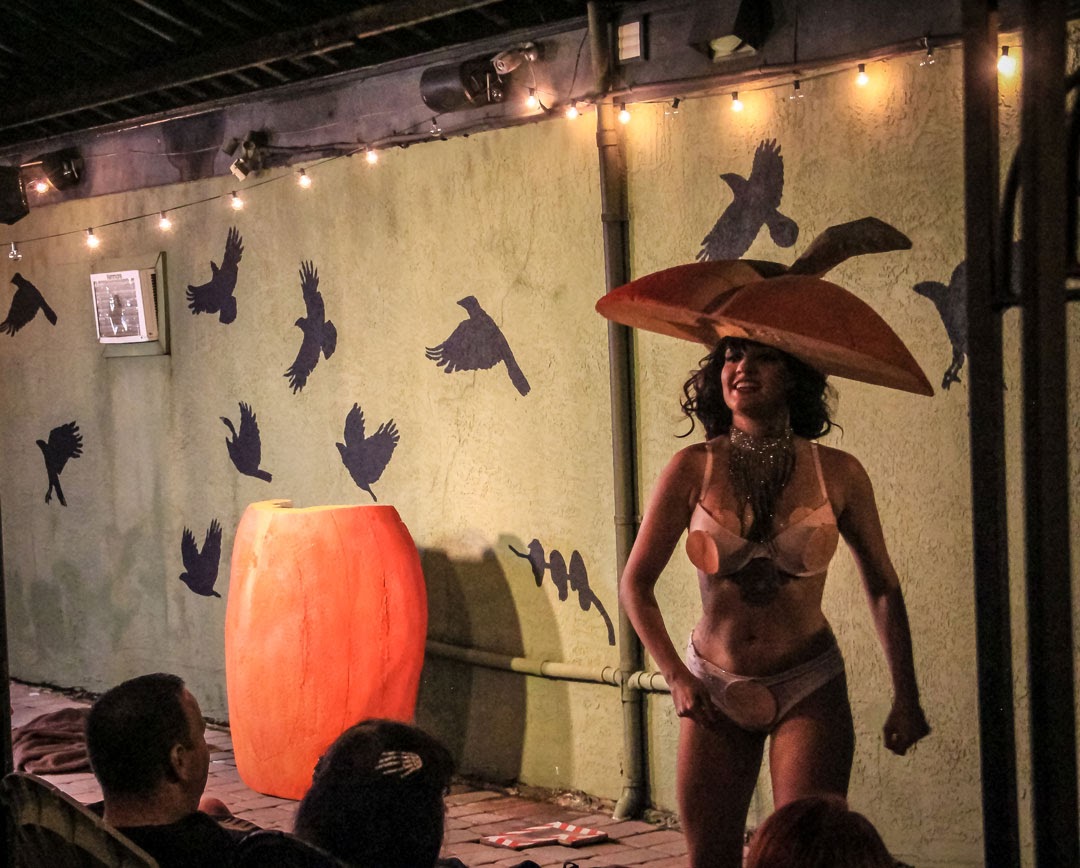 Mayven Missbehavin’s act is about, you guessed it, James and The Giant Peach. According to Mayven, the book was banned because of its allusions to sex, drugs and rock ‘n’ roll.  Photo: Daniel Veintimilla. Follow Mayven at facebook.com/MayvenIsMissbehavin. 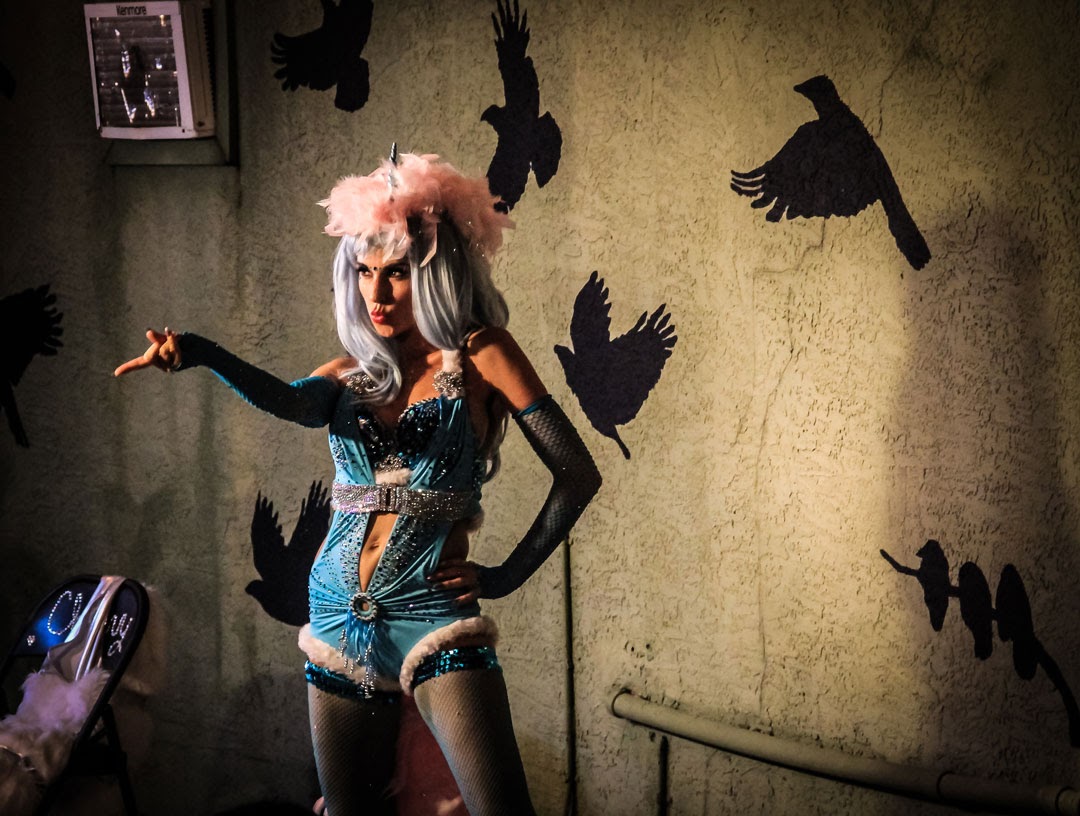 Cherry Von Topp performs a dance inspired by Shel Silverstein’s Where the Sidewalk Ends to “The Unicorn Song.” Cherry’s costume is inspired by the line “Glowing glittery Surprisingly, according to the blog “Banned,” Where the Sidewalk Ends is one of the most challenged children’s books because many parents view it as rebellious. The poems are said to undermine parental authority, and encourage the views of the occult. Photo: Daniel Veintimilla. Follow Cherry at facebook.com/CherryVonTopp. 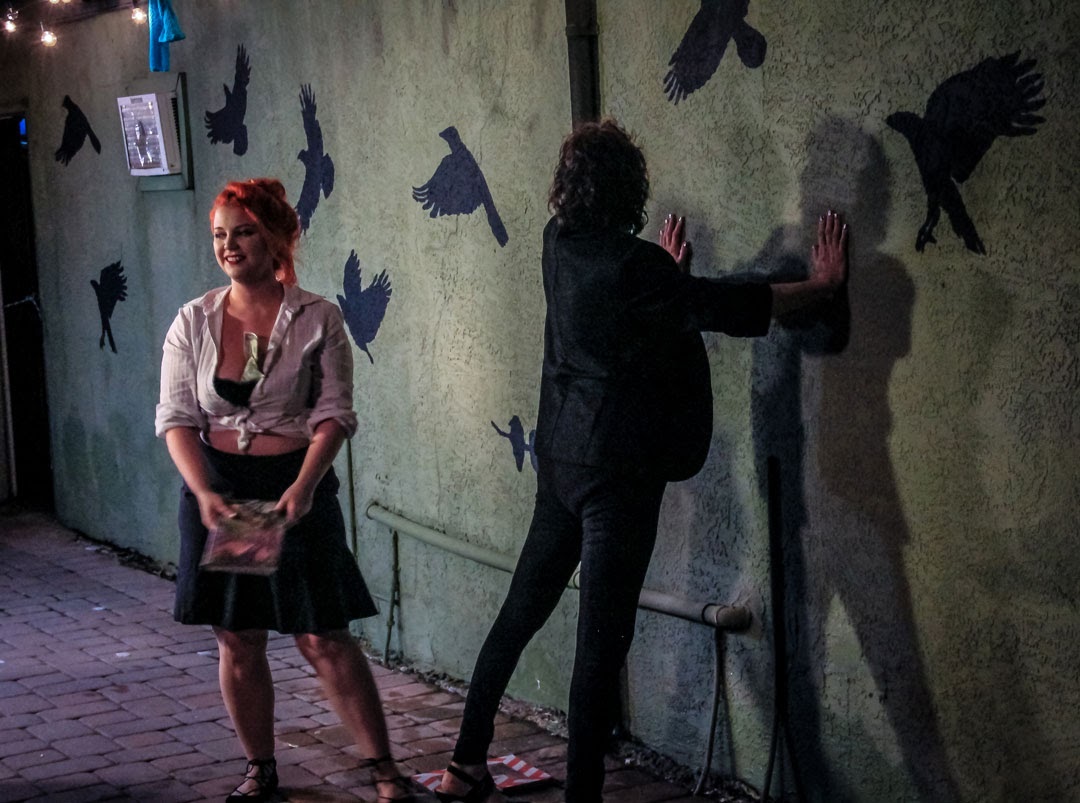 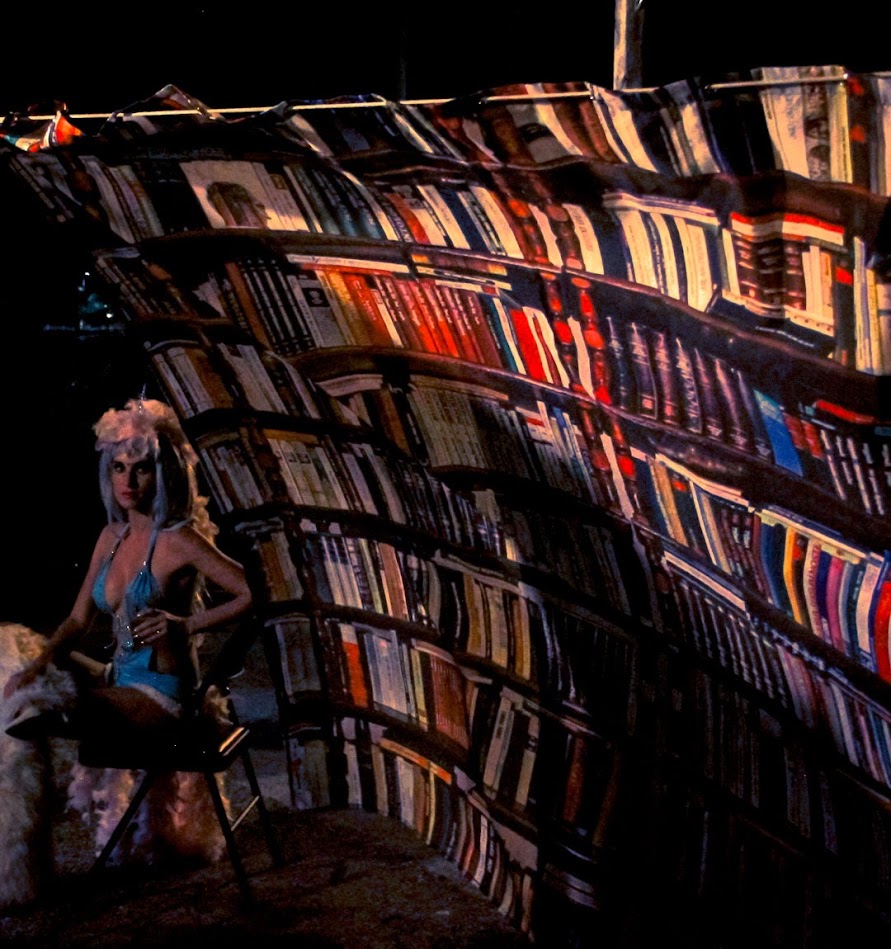 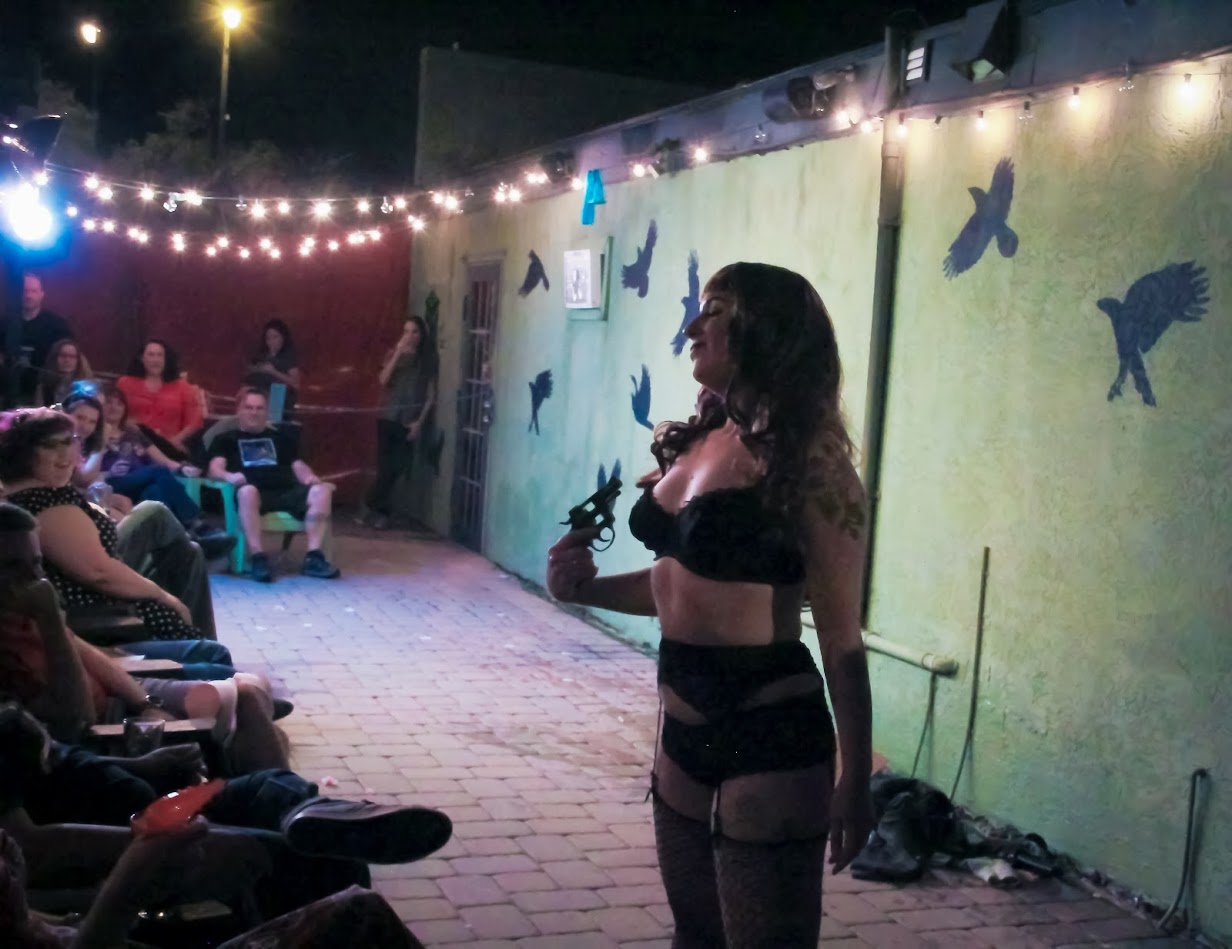 Nilla Bean performs a gun-totin’ For Whom the Bell Tolls. Photo: Daniel Veintimilla 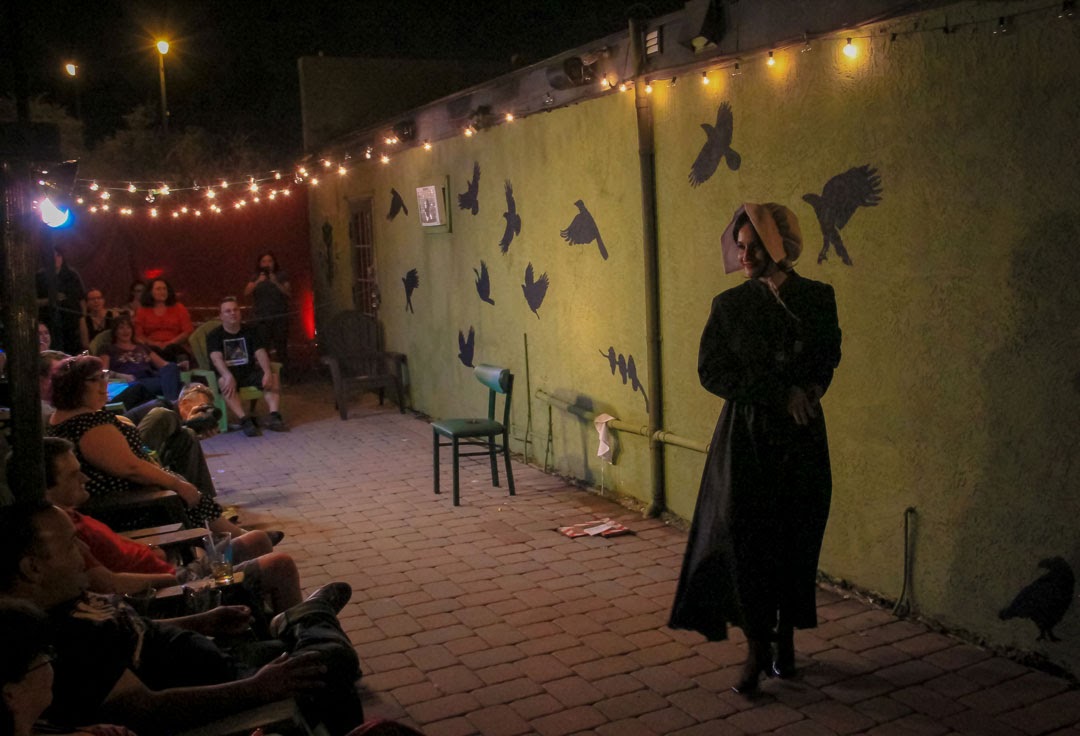 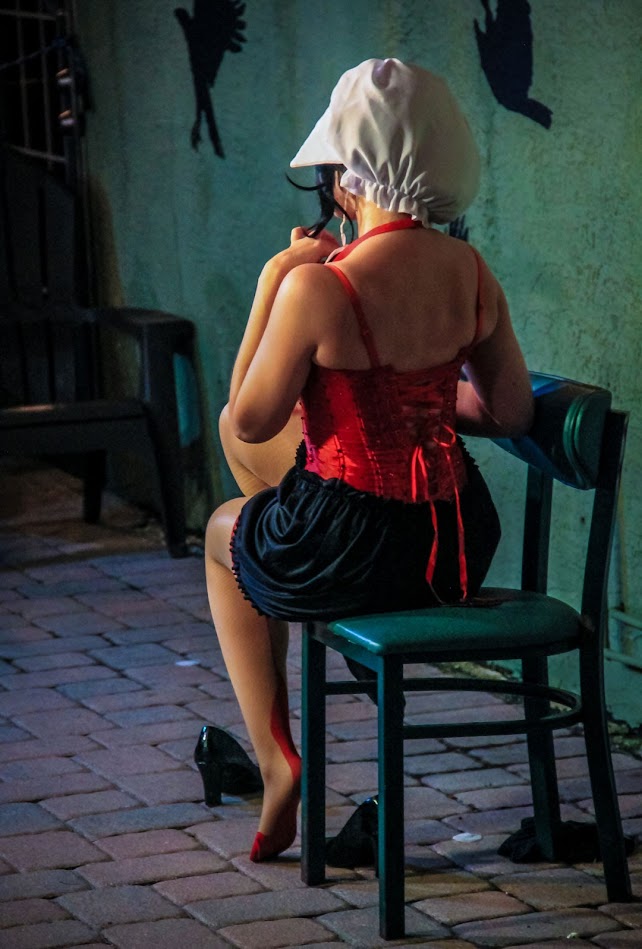 A little later, Tila Topaz off the woman inside the cloak. Photo: Daniel Veintimilla 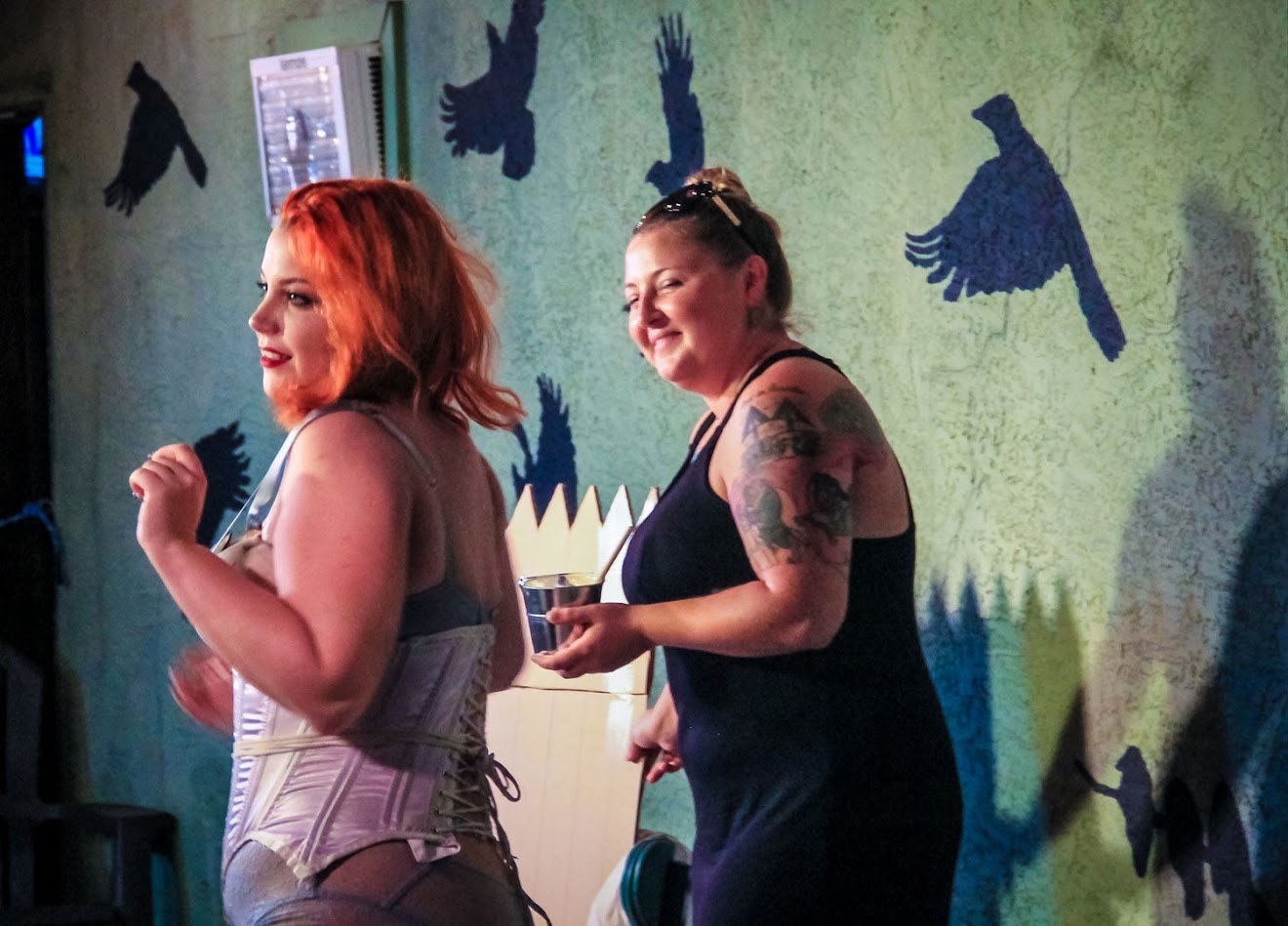 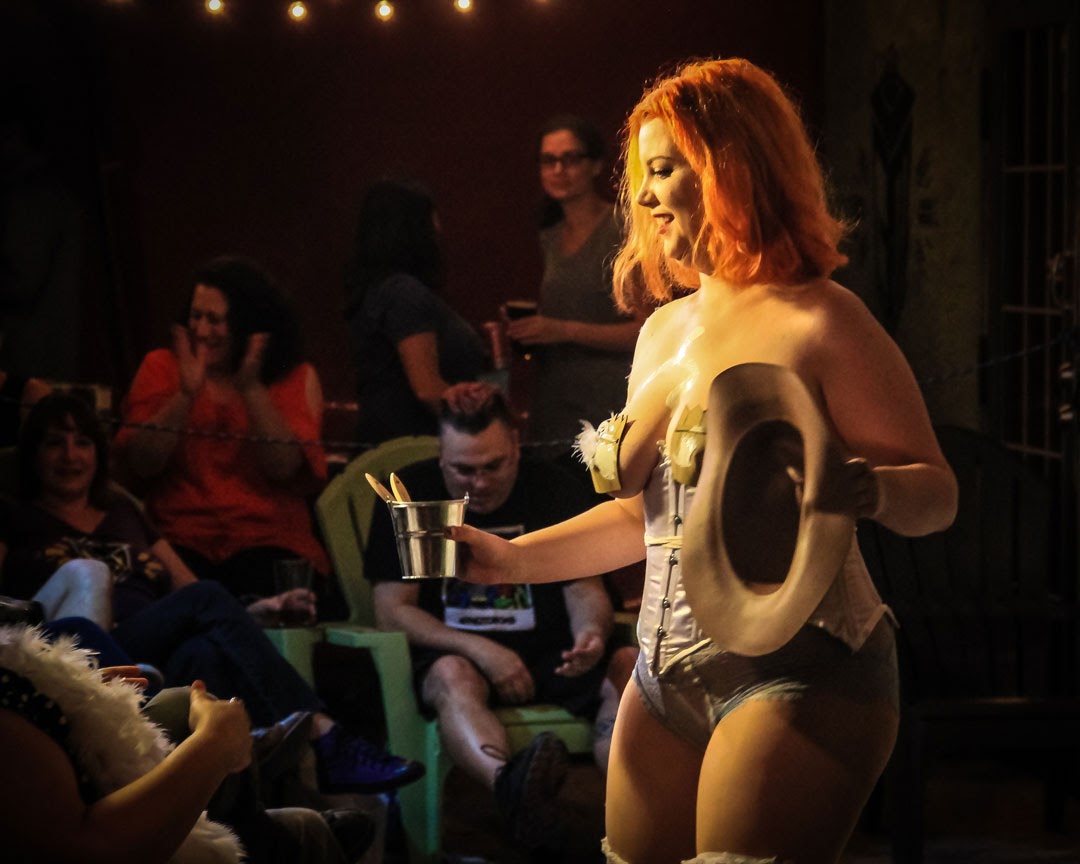 Dinah, after, solicits for tips, and gets bonus points for the fencepost pasties. Photo: Daniel Veintimilla 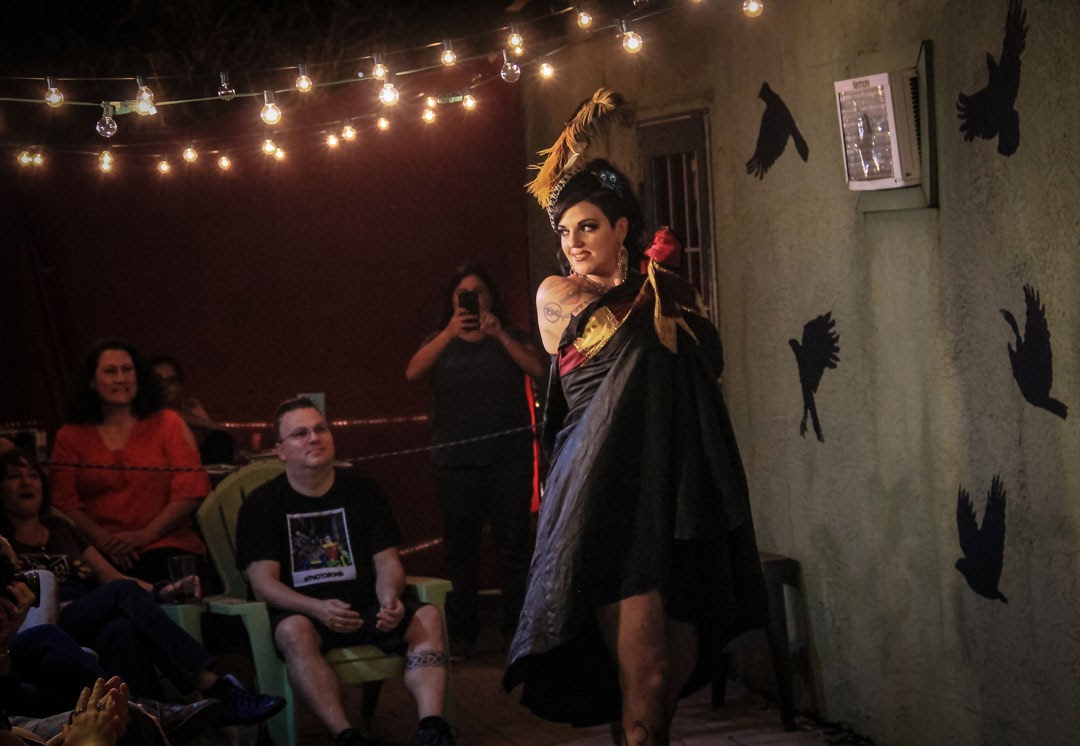 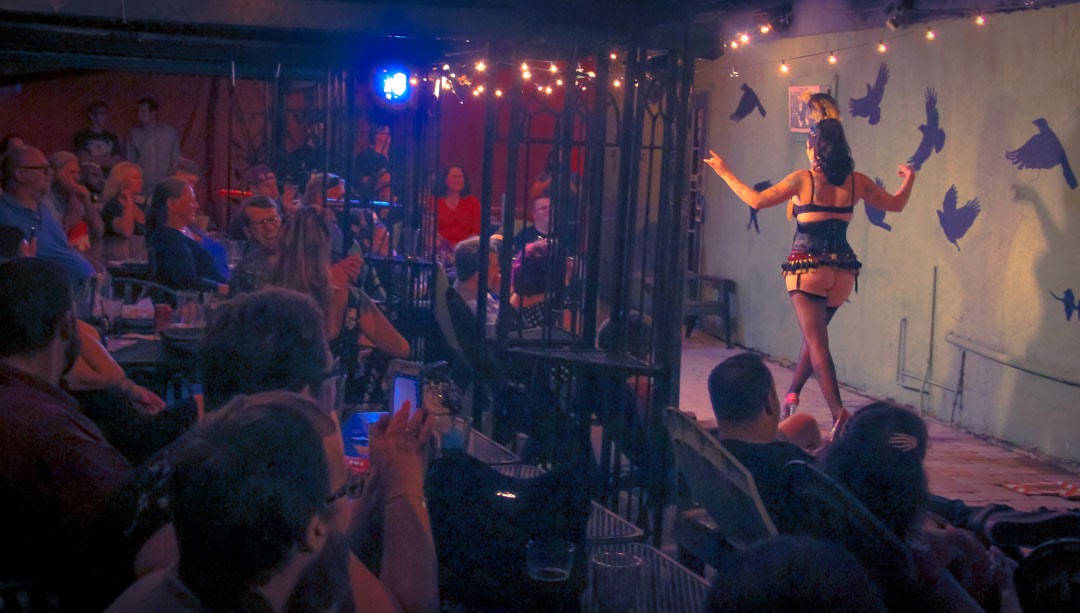 Franki Markstone finishes her set to the applause of an enthusiastic crowd. Photo: Daniel Veintimilla 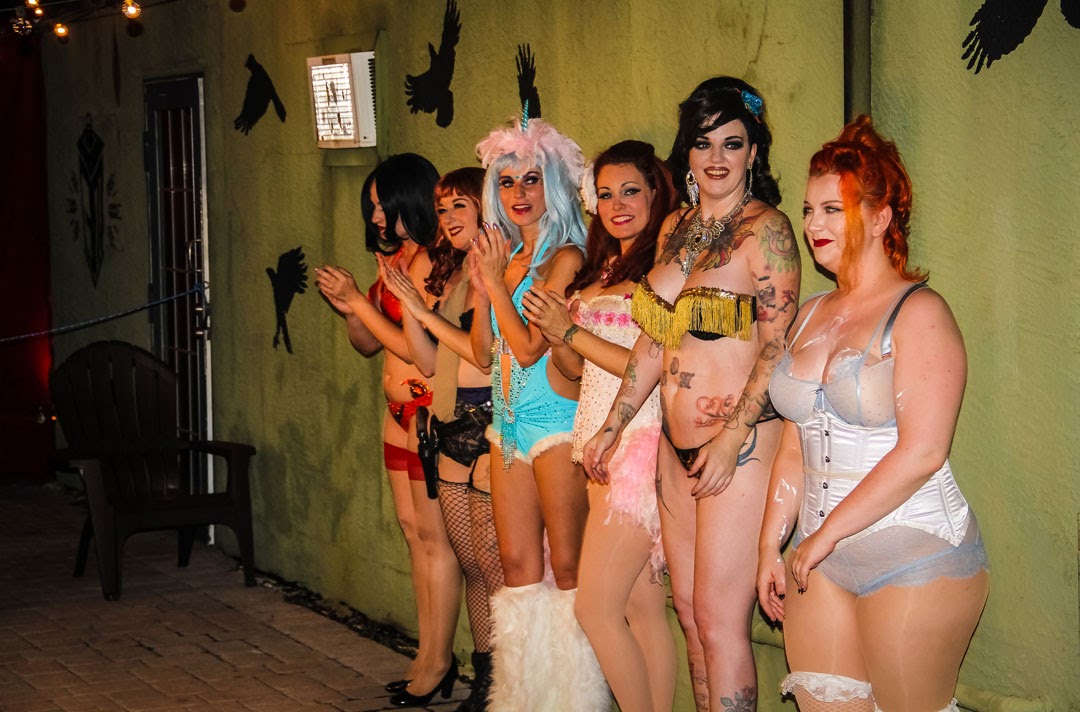 BY DAVID MORRIS | LITERATURE, THINGS TO DO